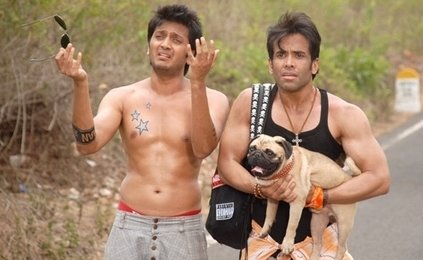 If I had a penny for every time I laughed during Kyaa Super Kool Hain Hum, I’d be able to afford an Asprin I so badly needed at the end of this roughly two-and-a-half-hour cringe-fest. The problem with this film isn’t that it’s so unapologetically vulgar, but that it’s just not very funny. And that’s a shame, because leading men Tusshar Kapoor and Ritesh Deshmukh have a winning chemistry and sharp comic timing…now if only they were required to do a little more than stripping down to their boxers and repeatedly making crude gay jokes.

The film is written and directed by Sachin Yardi, who co-wrote 2005’s comically superior Kya Kool Hain Hum, but the mandate for this sequel seems to have been – “let’s make it filthier”. In the process, clever writing and genuine humor have been completely sacrificed. The plot (if you can call it that!) doesn’t hold up either… Adi (Tusshar), a struggling actor, and Sid (Ritesh), a down-on-his-luck deejay, are best friends and roommates looking for that one chance to turn their fortunes. A series of misadventures lands them in Goa in pursuit of Simran (Neha Sharma) and Anu (Sarah Jane-Dias), and a diamond ring belonging to Sid’s frisky dog Sakru. Other offenders in this mess include Anupam Kher, who plays Francis Marlowe, an eccentric millionaire and film memorabilia collector who’s convinced that his dead mother has been reborn as a pug, and Chunky Pandey as a fake godman who claims he has a hotline to heaven.

Judging the film purely by the standards of a sex comedy, it still doesn’t compare with Masti or Kya Kool Hain Hum, both of which were naughty and suggestive, and far wittier than Superkool, which in comparison is uncomfortably explicit. To shake off Adi’s advances, Simran pretends to be a lesbian couple with her best friend Anu, and the ladies make several references to vibrators and penises, even as the background score over and over again breaks into a lewd rendition of Dil dola re, that song from Sanjay Leela Bhansali’s Devdas.

Although jokes are directed at midgets, fat people, dark people, the handicapped, and people of different castes, no one is more likely to be offended than gays. From sodomy to drag, from the limp-wristed stereotype to homosexuals as predators, every gay cliché is thrown up here. Also likely to be horrified are animal lovers, who’ll never look at a pug the same way again. Sid ‘hires out’ his four-legged friend Sakru to impregnate barren female dogs. At one point the oversexed mutt has his way with the dog Kher regards as his mother. In a scene towards the end of the film, Sakru runs wild at his own wedding, forcing himself on some half a dozen dogs one after another. I’ve never been more relieved by the memory of that opening slate in the film that promises no animals were hurt, and that these were trained creatures ‘acting’ for the camera.

Amidst all the juvenile double entendre and the lazy sexual innuendo (a vet tells Sid: “Your dog’s got a lot of style”, to which he responds: “It’s called doggie style!”), there are a handful of clever lines that inspire genuine laughs. Anu complains to Sid: “70 per cent of men cheat in India.” “The rest,” he replies, “go to Bangkok.” On entering Anupam Kher’s sprawling estate, Sid notices a gardener tending to the shrubs. “Maali,” he says to himself. When the gardener turns to reveal it’s a woman, “Oho, Antara Mali,” comes his rat-a-tat response. It’s hard also to keep a straight face when it’s revealed that Kher’s mother goes by the name Rosemary Marlowe. Get it? Roz meri maar lo!

Unfortunately these are only a few shining moments in what is otherwise a crass, unfunny film. The comedy here is puerile, and likely to be enjoyed strictly by teenagers who’ve never watched American Pie.

I’m going with one-and-a-half out of five for Kyaa Super Kool Hain Hum. It’s not that the humor’s adult that is the issue here, it’s that it doesn’t make you laugh!