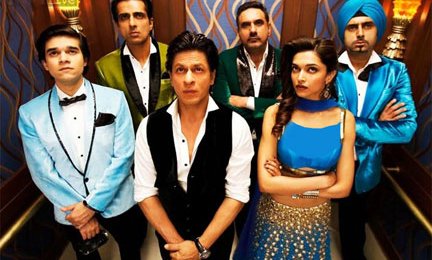 You’ll find yourself chuckling and cringing alternately while watching Happy New Year, in which director Farah Khan skillfully sets up a heist plot against an international dance competition scenario. It’s a curious premise, and Farah brings many of the same elements that she applied to good use in Main Hoon Na and Om Shanti Om, namely lots of self-referencing, affectionate nods to 70s Bollywood, and the ability to occasionally laugh at oneself. But there are also tiring revenge clichés, a shrewdly devised patriotic track, and that formidable length – a full 2 hours and 59 minutes!

The self-referencing too gets exhausting early on, as leading man Shah Rukh Khan repeats line after line from his previous hits. “Badi badi fights mein chhoti chhoti cheezein hoti rehti hain,” he says not long after we’re introduced to him taking a pummeling in an underground bout. “Main hoon na,” he says reassuringly to a concerned friend just moments after.

Shah Rukh plays Charlie, who’s assembling a team of down-on-their-luck ‘losers’ to help him steal a bunch of diamonds from a rich tycoon (Jackie Shroff) responsible for framing his father in a fake robbery. Tammy (Boman Irani) is an expert safe-breaker, Rohan (Vivaan Shah), a young hacker. Nandu (Abhishek Bachchan) is a drunk lout, and Jag (Sonu Sood) is the brawny muscleman of the group. Introductions and back-stories alone take us roughly an hour into the film, which is when Deepika Padkuone enters and livens up proceedings. She’s Mohini, a bar dancer recruited by the gang so she can teach them some killer dance moves that they’ll need when they go undercover in the World Dance Championship.

Borrowing ideas from such contrasting films as Ocean’s Eleven and The Full Monty, Farah nevertheless stages a distinctly Bollywood spectacle – loud, over-the-top, and blindingly bright. I can bet the costume budget of this film alone could feed a starving nation. There are moments of inspired lunacy that’ll have you rolling in your seat. The bits in which Deepika’s character Mohini insists on speaking in English although she can barely string a sentence together are terrific. My favourite scene, though, was one in which Abhishek’s character Nandu must think on his feet (literally) when he can’t unscrew a panel in the wall while executing the heist.

The screenplay itself is painfully predictable, and the heist plan is explained repeatedly in long-drawn detail, just in case we’re dummies. Logic is sacrificed at the altar of convenience in this script, and an overall feeling of been-there-seen-that hangs over the film.

Nowhere is that more obvious than in the way Shah Rukh Khan is projected on screen. His glistening eight-pack abs get more than a few close-ups, but the actor isn’t required to flex either his dramatic chops or his comic chops any more than he’s done in Farah’s own previous films. In contrast, Abhishek Bachchan is in very good form, nicely hamming it up as the coarse Nandu. Deepika too strikes just the right balance between broad humor and heartfelt emotion, giving us another winning character.

For a film in which dance is so integral to the plot, I didn’t think the musical set-pieces here stood out particularly. The focus isn’t so much on the moves, as it is on the scale of the dance numbers. And that’s a shame.

I’m going with two-and-a-half out of five for Happy New Year. If its indulgences were trimmed, this might have been a more enjoyable film.