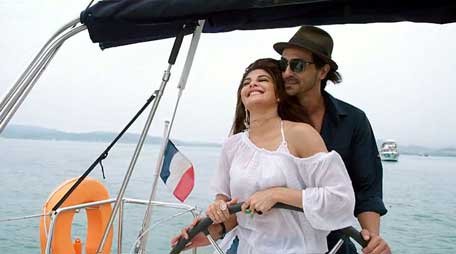 It’s hard not to become deeply suspicious and cynical about the movie business when you’ve watched a film like Roy. Is it really enough that Ranbir Kapoor agrees to make an extended cameo, for a producer to pump money into this boring, amateurish drivel that also happens to be unmistakably pretentious? Did anyone who was attached to the film actually read the script before showing up on set?

There are more unanswered questions thrown up by the film’s clunky plot, which concerns itself with four protagonists. In a nice stroke of irony, Arjun Rampal plays Kabir Grewal, a film director who sets off to Malaysia to shoot his latest film, although he’s suffering from writer’s block and his script is far from ready. Jacqueline Fernandez is Ayesha Aamir, an indie filmmaker from London, also shooting in Malaysia, although we literally never see her around actors or a crew, or doing anything that even remotely resembles work.

Kabir is the sort of fella who wears a fedora, indoors even, and bangs away on a manual typewriter. He’s had a long string of romantic entanglements, and after some initial resistance Ayesha becomes his ‘Girlfriend #23’, likely seduced by the impossible lines he comes up with. “Zindagi ka asli shor uski khamoshiyon mein paaya hua milta hai,” he says at one point, even as you roll your eyes and demand to know who talks like that.

There’s also Ranbir’s character, Roy, a master art-thief who has successfully broken into seemingly impenetrable museums in France, Qatar, China, and India. Inspired by Roy’s exploits, Kabir fashions the new script around him. And smitten by Ayesha, he casts her lookalike as his leading lady. So that’s a second Jacqueline Fernandez, this one permanently sporting bright red lipstick and a slightly different hairstyle.

Now two romances unfold, and you’re meant to be intrigued by where ‘reel’ life blurs into real. But it’s all such a plodding bore because you’re never invested in any of the characters. In an earlier interview debutant director Vikramjit Singh revealed that he drew on the once-romantic relationship between Quentin Tarantino and Sofia Coppola to craft Kabir and Ayesha’s romance in Roy. Singh borrows an incident from 2010 when Tarantino, at the time heading the Venice Film Festival jury, awarded the top prize to Somewhere, directed by Coppola, by then his ex, thereby sparking rumors that he’d played favorites. It’s a scene that appears to have been inserted into this film only as show-off on Singh’s part.

Ranbir looks like he was punished and forced to be in this movie; it’s such a sullen performance, you have to ask why a charmer by profession, a man who must win hearts so he can steal art, would never crack a smile. Arjun gives it what he’s got…but it doesn’t help that Kabir isn’t a particularly likeable character to begin with. Jacqueline, unfortunately, appears miscast in a part that required an actor with greater range.

The one strength of the film is its terrific soundtrack, even if those infectious dance numbers do pop up in not all the right places. But that’s faint praise for a movie that limps lethargically for close to 2 hours and 30 minutes, all but collapsing in a predictable twist ending that you’ve guessed a long time ago.

I’m going with one out of five for Roy. The unintentionally funny dialogues aside, it’s unlikely that you’ll be smiling very much through this misery.