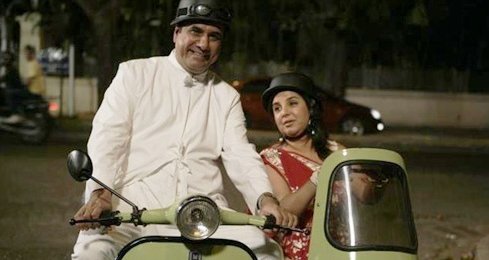 Unwilling to settle for the first girl who’s paraded before him, 45-year-old bachelor Farhad Pastakia is clear he will marry only for love. Farhad, played by a terrific Boman Irani in debutant director Bela Bhansali Sehgal’s Shirin Farhad Ki Toh Nikal Padi, is a lingerie salesman at a nearby store, and lives with his widowed mum (Daisy Irani) and her mother (yesteryear actress Shammi) in a Parsi colony in Mumbai. While his job proves to be a hurdle when it comes to his eligibility in the marriage market, his mum presents herself as an obstacle when Farhad finally meets his soulmate in feisty spinster Shirin Fuggawala, played with considerable zest by choreographer-filmmaker Farah Khan.

Romantic without ever being sickeningly sweet, and witty without wallowing in crude toilet humor, Shirin Farhad works on account of its inherent sincerity, and because Bela tells a simple story with simplicity. The film’s basic premise – of a romance thwarted by parental opposition – is hardly original, but writer Sanjay Leela Bhansali (Bela’s brother) puts a fresh spin on that familiar formula by weaving the love story around a middle-aged couple.

Setting it against the backdrop of the Parsi community gives the film a distinct texture, and much of Shirin Farhad’s light-hearted laughs come from the quirkiness of its characters. Like the delusional old neighbor who’s in an imaginary relationship with Indira Gandhi, or Farhad’s own mother who clings on with dear life to an illegal water tank that her husband installed in their home before his death. It helps that Bela casts real Parsis in all speaking roles (Daisy Irani, Shammi, and Mahabanoo Modi-Kotwal as Shirin’s doting aunt, are the pick of the lot); that gives the film an authentic flavor instead of the fake impressions that non-Parsi actors invariably deliver in Parsi roles.

At the heart of the film, of course, are Boman Irani and Farah Khan who are superbly cast and bring so much to their characters by way of accents and mannerisms and evidently improvised dialogue. On looking at the steeply-priced dishes on a menu while out on a date, Shirin asks Farhad: “Bartan toh nahin dhona padega na?”

The couple shares a warm chemistry, and some of the most enjoyable moments in the film involve their peculiar responses to such romantic-movie staples as the first kiss, the hint of sexual attraction, and the marriage proposal. When she’s in hospital for accidentally swallowing a cherry that contained the ring Farhad was going to propose with, Shirin tells him: “Maine kabhi nahin socha tha meri shaadi ka ring yahan se niklega!”

Not everything works though. Even if you’re willing to look beyond the TV serial-production values, it’s hard to overlook the fact that Shirin Farhad succumbs to loud melodrama occasionally, and some bits stand out for sheer silliness. A portion towards the end, where Farhad is bashed up by neighbors and hauled to the police station for attempting to climb over a gate, feels pointless. And it doesn’t help that the film’s narrative is punctured by too many songs that serve no real purpose other than adding to the film’s length.

It’s a good thing the film’s merits far outnumber its flaws. Beneath its cheeky wit and some of those slapstick gags, Shirin Farhad subtly touches upon issues like pride in one’s profession, embracing one’s physicality, and no expiry date on love. Bela steers clear of caricaturing the Parsi community, at best allowing Parsi characters themselves to take affectionate jibes at each others’ tics.

I’m going with three out of five for director Bela Bhansali Sehgal’s Shirin Farhad Ki Toh Nikal Padi. It’s a charming film made with heart. Give it a chance, you won’t be disappointed.