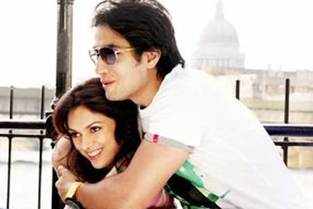 Story: A globetrotting love story, with modern romantic equations and emotions evolving at every stopover.

Movie Review: Does your love change with the character of the city you are in? Do your pheromones trigger a different response when you kiss the same girl in different parts of the world? That’s the formula of this three-city, romantic tour called London Paris New York. Reminding us loosely of the Hollywood romance ‘Before Sunrise’ (starring Ethan Hawke and Julie Delphi),London Paris New York, is a story of a couple who spend three nights, in three beautiful cities. This sparks a light-hearted romance over crackling conversational chemistry and long walks through the picturesque metros. Intensifying with dramatic highs, and emotional meltdowns.

Nikhil Chopra (Ali Zafar) and Lalitha Krishnan (Aditi Rao Hydari) are free-spirited, urban adolescents who meet by chance in London. They’re instantly drawn to each other. Like most urbane youth on their own, they chat, kiss and vow to meet again in six months. In Lalitha’s home city of New York. However, they decide not to pursue a long distance relationship, yet, they can’t get over this not-so-fatal attraction. Hence, this mismatched and geographically-crossed couple go their separate transit lounges around the world, to search out each other, only to love and lose each other over and over again. Blame it on the rivers – Thames, Seine and Hudson – for pouring waters over their attraction each time. With a new twist in each city.

Ali Zafar is just the charming, almost cocky boy this love story needs. He is lovable, natural and subtly brings that slight cheekiness, sprinkled with boyish humour and attitude. He effortlessly adds dimensions to his character that is expected of his age and time. The casualness, yet confident aplomb with which he approaches his role is impressive. His emotional outburst under the Brooklyn Bridge in New York proves he is capable of much more than serenading you with his strings, songs and smiles.

In her first full-fledged lead role, Aditi Rao Hydari is immensely likeable on-screen, and confidently displays maturity in some moments. At times, her attempt to draw the right expression borders on being forceful, but the awkwardness only adds to the charm of this girl-next-door and her transition from a girlie-girl into a girl woman. The duo make an affable on-screen pair.

The London-based Tam-Brahm, Anu Menon, takes the Director’s chair for the first time with a rather simple subject, but manages to make it a non-cliche for some parts. The screenplay (also by Anu Menon) lacks a certain sense of fluency and at times seems disconnected. However, the characters and dialogues (Anu Menon & Ritu Bhatia) are real and unpretentious enough to lure the youth, whether it’s the slight reference to sex positions or the bodily chemistry of a lip kiss.

When you have a pop-icon for a music composer, the tracks are bound to be spot-on. Ali Zafar’s music gives the film its freshness and adds to the lyricism of the love story. London Paris New Yorkis a sweet story that deals with very real emotions. It is urbane, cool and thankfully, not dated. The simplicity of the dialogues makes it enjoyable. It deals with the trials and tribulations of the youth, and the complexities of finding real love. It probably won’t move you to tears, but one thing is for sure — after traveling across the globe, this one won’t leave you jet-lagged.