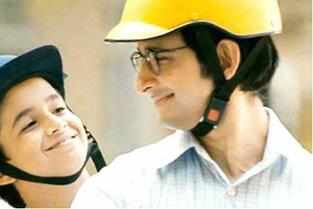 Critic’s Rating:  4/5
Cast: Sharman Joshi, Boman Irani, Ritvik Sahore, Paresh Rawal, Seema Pahawa
Direction: Rajesh Mapuskar
Genre: Comedy
Story: A little boy dreams of nothing but cricket and his doting dad can go to any extent to make his son’s seemingly impossible dream come true. Even if it means stealing Tendulkar’s red-hot Ferrari for one day of his life.

Movie Review: Vroom! Vroom! It’s time to go zoom! Rev up those engines and turn up that turbo firepower for a ride on ‘560 horses’ (as the Ferrari’s horsepower is cutely referred to in this squeaky clean, red metal enterprise). Made for all boys, who never really grow up, and all children who aspire to grow into the revered boots of cricket legend Sachin Tendulkar. And nothing is more aspirational than a sparkling red Ferrari – the exact same one owned by the Little Master himself. A vehicle that grows beyond its phallic symbolism, psychologists refer to, and stays the dream toy of all big boys. The better to bait them with, my dear.

The bait here is a boy’s big dream, of being another Sachin someday. Kayo ( Ritvik Sahore) is a budding cricketer, with potential to play more than gully cricket. Rusy ( Sharman Joshi), a single father, with a modest job (as head clerk at Worli RTO), straight-laced, painfully honest with Raja Harishchandra-like qualities, has one goal – to fulfil his little boy’s dream. With a smile pinned on his face (brighter and shinier than a Ferrari at times) through all weather, he’s ready to take on the world (of cops, thugs, wedding planners, and our very own Tendulkar). Kayo qualifies for a training camp at the Mecca of cricket, Lords, but there’s a hitch on this pitch. Damn the talent, he needs to cough up big moolah for it. Mota Papa (Boman Irani), Rusy’s haggard and hopeless father – who’s lamenting a tragedy that’s changed the game of his life – dissuades them from driving a pointless, fancier-than-a-Ferrari dream. In the meanwhile, a local wedding planner (Seema Pahawa) has over-promised a thug politician a sawaari on red-hot wheels, for his nincompoop son’s baraat. And only Rusy can bail her out of this mess, with his cricket ka rishta, which steeps deep into his genes. Once the mean machine hits the road, all hell breaks loose, all rules are broken and thereon, begins a dream run that could even put Schumacher to shame.

This indeed, signals a new innings in Sharman Joshi’s career. His performance is heart-warming, shuffling between light-hearted moments and tear-jerking emotions. Young Ritvik, like a true captain, holds the team together. This little stock of talent is so natural and expressive, he’ll bowl you over.

Boman Irani, with his Parsi nuances, hunchback, slur, and a beautiful play of emotions ranging from despondency to exuberance, delivers a smashing performance. Paresh Rawal, in a small role, ‘catches’ you, right on. Satyadeep Misra (coach Vilayat) and Seema Pahawa score big with their superb supporting acts.

Sometimes, it doesn’t take 11 players to make a dream team. Debutant director, Rajesh Mapuskar, has a winning team with just three, plus a red hottie (Ferrari of course, we’re not talking about boombaat Balan). And guess what…we don’t miss the presence of a pretty ‘maiden’ here too. The spirit of the film is in the effusive chemistry between Rusy and his son, which is entertaining and utterly moving. The writing (Mapuskar and Vidhu Vinod Chopra) is refreshing, Raju Hirani gives the dialogues his trademark spin, and the film unfolds with sheer subtlety and simplicity. Except that, the ride could’ve been shorter (jumping a few red signals would’ve helped), and a few speed bumps saved (a song with a flying red car). The climax goes on an emotional overdrive, and at times, with extra spoonfuls of sugar the film is too-good-to-be-true. But that’s feel good cinema for you!

What tosses in its favour is the uniqueness of the concept (so what if you missed a ride with the real Sachin in his laal gaddi). Look at the brighter side of life, dikra.