The Attacks Of 26/11 Movie Review by Rajeev Masand 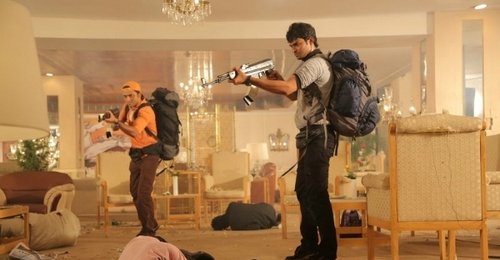 It’s not often that you go into a movie knowing exactly what to expect, but The Attacks of 26/11 is that rare exception. The plot and the end of this movie are no secret because the 2008 terrorist attacks on Mumbai, and the way the horror unfolded on the night of November 26, is still fresh in public memory. Unfortunately, in the hands of director Ramgopal Varma, these unprecedented events are portrayed in a one-dimensional, jingoistic, and almost hysterical tone.

The Attacks of 26/11 often resembles a tacky B-movie. Even if there’s a voyeuristic fascination in observing how 10 men managed to lay siege to a city like Mumbai, this film is so lacking in genuine emotion and original perspective that despite the carnage, you’re hardly moved.

Varma, who has said the film’s facts are based on Mumbai’s Commissioner of Police Rakesh Maria’s deposition to the Inquiry Committee, and on Ajmal Kasab’s confession, opens with that very deposition. Although never named in the film, the Commissioner, played by Nana Patekar, narrates the events of that night to a stony-faced committee played by a set of wooden actors. Patekar himself hams it up, adopting a painfully slow drone, perhaps to remind us repeatedly just how serious a matter this is.

It’s easy to stay engaged when the actual events are unfolding… But that has less to do with Varma’s film than the riveting nature of the horrific attacks. You’re rapt as you watch the shockingly easy manner in which the armed men enter the city through the sea, and cold-bloodedly open fire at Leopold Cafe, The Taj Hotel, CST Station, and Cama Hospital. Alas, most of the attacks are staged awkwardly, and handled without much finesse. They’re gimmicky, often punctuated with women and children wailing, and sadly, Varma rarely lingers on any real emotion or expends energy in building characters. There is blood, gore and slow motion used to accentuate the horror than actual feelings, be it for the victims or the martyred cops.

Equally disconcerting is caricaturish manner in which Kasab and his band of brothers are portrayed like snarling villains. Their faces, caressed in close-ups, resemble heinous plaster-of-Paris masks, with bulging eyes and ferocious frowns. Sanjeev Jaiswal, playing Kasab, overacts wildly, speaking in a raspy voice and erupting into hyena-like laughter.

Oddly, Varma skips showing us the attacks on the Oberoi Hotel and Colaba’s Nariman House, just making a passing mention of both. The film’s one arresting sequence is the brave police operation in which Kasab was finally captured in a silver Skoda, off Chowpatty.

The Attacks Of 26/11 needlessly builds the Commissioner’s role into a larger-than-life one, and therein it slips. You watch as Patekar sips chai while lecturing a brain-washed jihadi like Kasab in a morgue with nine bodies rotting an arm’s length away. The rambling conversations between terrorist and cop make you shift restlessly in your seats.

Like the recent Zero Dark Thirty, you know what is coming to Kasab at Yerawada jail in 2012. The difference lies in the treatment; The Attacks Of 26/11 deserved better writing and more subtlety to capture a tragedy of this magnitude.

I’m going with one-and-a-half out of five for Ramgopal Varma’s The Attacks Of 26/11. It’s a chapter in Mumbai’s history that we’ll never forget, so a movie on the attacks should have left you more than just comfortably numb.