Sanket’s Review: Gabbar is Back 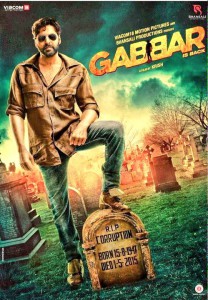 A plot that’s milked time and again, a narration that isn’t path-breaking, and a hero who is here to flush away all the corruption – yes, this pretty much suffices the overview of “Gabbar is Back”. But yet, there’s something really striking about the film’s intent that chews away some of the problems that the film suffers from. The film gives a very interesting account of a common man’s anger that turns out into an outrage resulting into menacing avenge against the corruption that is taking place every day, every second.

“Gabbar is back” thrives on some terrific moments which give the film an energetic tone. The first half nicely establishes the plot including the one of a constable played by Sunil Grover. Although a particular episode constructed in a Hospital robs away all the applause of the film. Although one has to deal with some slow paced scenes and interrupting song sequence that creates restlessness.

The second half is a mix of some heartening moments like that sudden outrage of a constable or Akshay’s playfulness against the villains and also some overdone sequences like the final 5 minutes. Also the uninteresting item song did by Chitrangada leaves no impact.

The only song that is likeable is the one filmed on Kareena and Akshay. The action in the film is largely good because of its realistic approach although the “bounce” scene looked silly. The dialogues penned by Rajat Arora are good enough.

Akshay Kumar plays his part well. Apart from few scenes where he did try hard, his character felt very enjoyable and yet heartfelt. Sunil Grover gets a juicy role that shall connect with hoi polloi and also gets clap-trap sequences. Shruti Hassan has good presence but her dialogue delivery sounded imperfect.

To put things into perspective, “Gabbar is Back” is watchable but not thoroughly enjoyable because of lot of pretentious heroism towards the end and also the uneven pacing in second half. But a onetime watch won’t bother you if you know what you are heading for.