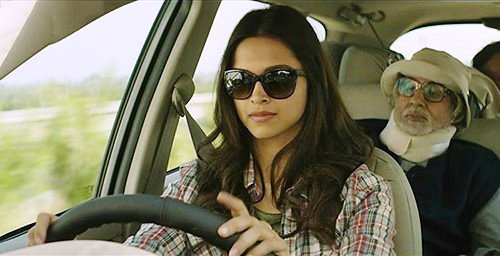 One hardly expects to be rewarded with warmth and genuine sweetness from a film about a cantankerous old man and his exasperated grown-up daughter who spend most of their time arguing about his bowel movements. But Piku, directed by Shoojit Sircar, is a charming, unpredictable comedy that – like Sircar’s Vicky Donor – mines humor from the unlikeliest of places.

Deepika Padukone is Piku, a successful architect struggling to manage both her career and the responsibility of her 70-year-old father Bhashkor Banerjee (Amitabh Bachchan), who can be quite the handful. The cranky Bengali senior is a hypochondriac, and also happens to be perpetually constipated. His motions, or lack thereof, are the subject of virtually every conversation in their Chittaranjan Park home. He’s obsessed with details of the color, the texture, the size, and the consistency of his poop, which he insists on sharing with his daughter even when she’s at work or out on a date.

Bachchan is pretty terrific as Bhashkor, who reminds you of that oddball uncle that you nevertheless have a soft spot for. He bickers with the maids, harrows his hapless helper, and expects that Piku stay unmarried so she can attend to him. At one point, to ward off a possible suitor, he casually mentions that his daughter isn’t a virgin; that she’s financially independent and sexually independent too. Bachchan embraces the character’s many idiosyncrasies, never once slipping into caricature while all along delivering big laughs thanks to his spot-on comic timing.

Also bringing his best game to the film is Irrfan Khan as Rana Chowdhary, the owner of a private taxi company who volunteers to drive Piku and her father all the way from Delhi to Kolkata when the old man insists on visiting his ancestral home. The film takes the shape of a road-trip movie from this point on, and it’s Khan – applying his trademark dry humor – who gets some of the best moments here. Amused by Bhashkor’s fixation on his tummy issues, Rana explains the merits of squatting on a Western-style toilet, and in another hilarious scene draws out the entire digestive route of food for a fascinated Bhashkor.

But it’s with the character of Piku that writer Juhi Chaturvedi pushes the envelope farthest, giving us a fully flesh-and-blood modern woman. Unembarrassed to admit she has sexual needs, unafraid to pursue a casual relationship with a colleague, and never shy of snapping back at her patience-testing father, Piku is a refreshing character in the movies, and Padukone plays her without a hint of artifice. It’s a performance that never feels like a performance; she’s that good in the film.

Into this richly layered script, Chaturvedi sneaks pertinent questions about ageing, the shifting dynamics of responsibility between parent and offspring, and the line between duty and sacrifice. Sircar keeps a breezy, light-hearted tone throughout, infusing a hint of humor even in the decidedly emotional bits. He surrounds his leads with strong supporting players (including a feisty Moushmi Chatterjee as Piku’s thrice-divorced aunt), and shoots relatively long conversation scenes in a manner that feels real and honest and unaffected.

I’m going with four out of five for Piku. Although obsessed with all the wrong body parts, it’s a film that’s full of heart.