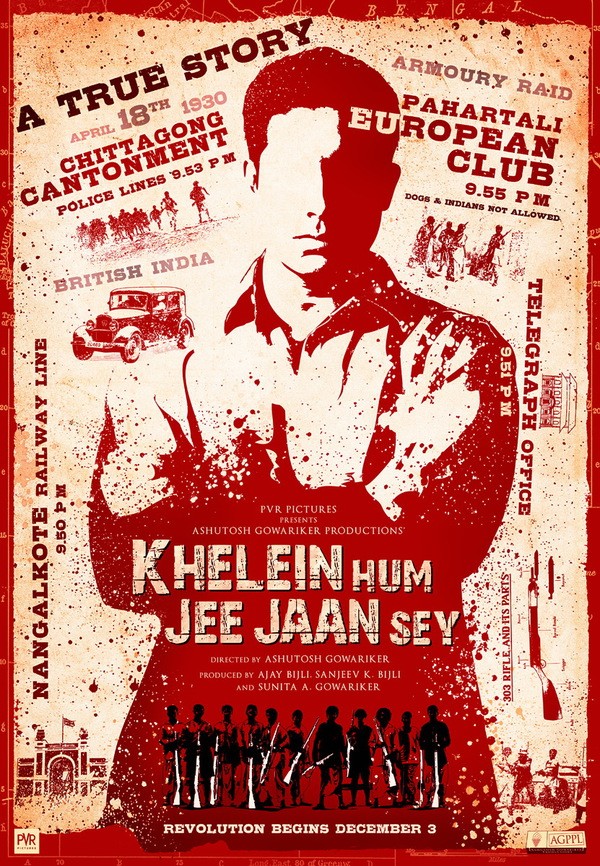 1930, British India: In the province of undivided Bengal lies the sleepy, peaceful port of Chittagong. In this unassuming little town a revolution is about to begin; a revolution which will forever wake all of Chittagong and inspire the entire nation. April 18. 1 night. 5 simultaneous attacks. A band of 64 – 56 innocent yet fearless young boys, 5 defiant revolutionaries, 2 determined young women, and an idealistic leader Surjya Sen, a school teacher by profession. This group of 64 represents a little known chapter in history; a forgotten night that reigned terror on the British through a series of calculated attacks. Khelein Hum Jee Jaan Sey is a true story of these forgotten heroes.

Khelein Hum Jee Jaan Sey is based on the book ‘DO and DIE: The Chittagong Uprising 1930-34’ by Manini Chatterjee. Some of the scenes stand out like the one where they find out there is no ammunition or the scene where Pritilata (Visakha Singh) attacks the club and some of the final scenes. The best scene of the movie is the one where they have to retreat and Surjya Sen has to ask his followers to split in groups.

Some of the scenes seem a bit silly – every teenage character introduces himself and then a few minutes later we have every one of them being interviewed. It also seems like Surjya Sen has no qualms in using minors in an armed struggle. There should have been some dilemma portrayed and some valid reasons given for their use. This just makes it appear as the kids were exploited because they wanted their ground back. Now there was supposedly a traitor among the group but Ashutosh does not show that part at all. It could probably have made the movie more interesting. Kalpana is under house arrest and being watched and yet she has no problem coming to Surjya Sen.

Dialogues are so lame – teenagers talking about what Vande Mataram means, “Isse Musket Kahte Hai Aur Isse Musket Ki Goli”, “Isse Chloroform Kahte Hai”, Surjya Sen telling the Judge “You are guilty”. Art Direction by Nitin Chandrakant Desai is excellent. He recreates the 1930s very well with the locales, the vintage cars, houses and the chairs. Cinematography by Kiran Deohans is good. Most of it is in dark settings as the action in the second half of the movie takes place at night.

Music by Sohail Sen is mediocre as none of the songs are any good. ‘Yeh Des Hai Mera’ seems like a poor version of “Yeh Jo Des Hai Tera” from Swades. The whistling in the title song is good but the song itself is no good. The ‘Nayan Tere’ song seems totally unnecessary in the movie. Background music by Sohail Sen is no good either. It bears a Lagaan hangover and at places seems like it is actually a piece from Lagaan. A movie like this needed a much better background score.

Abhishek is decent in a very understated role but seems a bit uncomfortable with the Sanskritised Hindi. It reminds one of his character from Paa with the dress and even acting. He is really good in the scene where he asks everyone to split into smaller groups to avoid capture. Deepika acts well though there are places where her body language seems stiff. Sikander Kher is very good and so is Visakha Singh. The rest of the cast is decent.

The title of the movie itself seems to downplay the sacrifice by talking about a game. Yes the movie’s starting point was a game but the rest of the movie is not about the game. The movie is well intentioned but Ashutosh fails to make it interesting. He seems to have tried to be true to the actual story for the most part and not glamorize it or fill it with jingoistic scenes. This is a story that deserved to be told but it could have been told vastly better. The problem with the movie is that it is very lengthy, dull & boring. Ashutosh could have fleshed out some of the lead characters more so that the audiences could feel for the characters. It is more an event based film than a character driven film. Its like watching a documentary on History channel.