No One Killed Jessica Movie Review by Sputnik 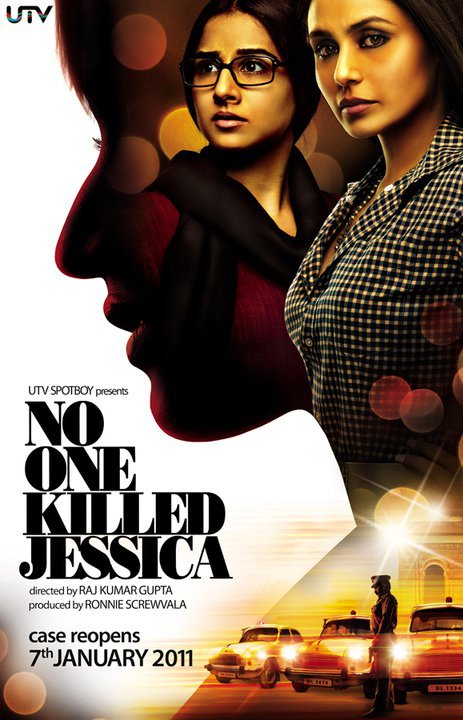 New Delhi, 1999. Jessica, a young attractive model, trying her hand at bartending, is shot dead at a celebrity party! Her crime – refusing to serve a drink after closing hours! The culprit Manish, son of a prominent politician, inebriated by a deadly cocktail of alcohol and a sense of entitlement, pulls the trigger in a fit of rage. With 300 of Delhi’s swish set present at the party, many of whom are witnesses to the murder, Manish looks all set to go to the gallows. Except, that it doesn’t quite turn out that way! Now, two women, Jessica’s sister, Sabrina and the feisty TV reporter, Meera will have to drum up every resource at their disposal to outwit Manish at his own game, if the truth is to have any chance of prevailing over money and political clout.

The movie is based on the true story of Jessica Lal murder but is part real and part fiction. There is a fictional NDTV journalist modeled on Barkha Dutt who is shown as completely responsible for the turnaround while in reality it was Tehelka who was more responsible. If it is any consolation the movie does thank Tehelka for journalism.

Some of the scenes stand out like the murder scene and the sting scene with the actor and the scene where Manish’s parents show up at Jessica’s house. Now the flaws. Meera narrating the story seems to give undue importance to her. Meera fighting with her boss to give her the case seems totally unreal. The courtroom scenes are pathetic with amateurish acting. There is another unnecessary masala scene where Jessica is shown beating up some eve teaser.

Dialogues are good at times and pathetic at times. Music by Amit Trivedi is ok with the song Dilli being the best. Saali Re is irritating. Background music is mediocre. A movie like this needed a much better background score. Sure its different and probably original but one can tell how mediocre it is when one compares the background music of RDB and this movie in similar candle light scenes.

Vidya is decent for the most part but bad in a couple of scenes. Rani is irritating and overacts. Her using cuss words seems totally unnecessary and so wannabe. Rajesh Sharma who plays the cop acts well and gets some of the better dialogues. Neil Bhoopalam is good as the actor and Mohammed Zeeshan Ayub is good as Manish. Myra Karn is decent and seems to have been chosen well with some physical resemblance to the real Jessica.

Raj Kumar Gupta’s direction is good at places and rank bad at places like the courtroom scenes. The movie also seems to be compromised to make the stars Vidya and Rani happy. The first half is all Vidya and the second half is all Rani with Vidya taking a backseat. The effort to make the movie commercial results in more masala than real. The movie could have been brilliant but it ends up as average fare.