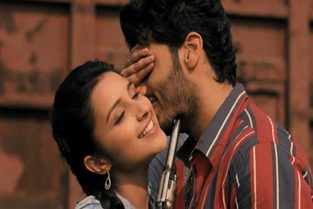 Story: Where love and hate collide, this love story is born. Two people who’re raised hating each other, break the unwritten family dictat; and fall in love. These outlaws of love thus start a new war.

Movie Review:It’s the war of the roses. And it’s as (t)horny as it can get. Splattered with bandooks and badmaashi, goondas and gaalis – starts this ajab prem kahani. Firebrands Parma (Arjun Kapoor) and Zoya (Parineeti Chopra) are childhood hate-mates, born into politically warring families who’ve avowed to hate unto death. So, in the rustic and earthy brown landscape of small-town Almore – where pocket guns are a fashion accessory, and local yokels could kill for anything – diesel or dancing girl Chand (Gauhar Khan), the Queen of ‘Kwality Baar‘ – a love story blossoms between loveable rowdy rascal Parma and feisty, free-spirited Zoya. They growl at each other with the same fierce passion with which they grope each other and get-it-on. Most riveting in this love-hate plot, is the (fore)playful chemistry between the two, with their volatile verbal wars, and sexed-up lovemaking; even between chases and gunshots. Rare indeed to find such a beautifully complementing debut pair onscreen.

In an impressive debut, Arjun Kapoor believably plays Parma with dollops of arrogance, energy and unabashed guts; chomping with the same crudity with which he shoots, spits gaalis, pisses on posters, manhandles his girl and makes raw love. He uses his boy-man charm topped with that infectious ‘batteesi’ effectively, and keeps up the temperatures throughout.

Parineeti Chopra is fabulously effervescent. As the ‘mango ‘ishmile‘ flashing Zoya, she’s adorable and admirable. She lacks the obvious, larger-than-life mega-screen presence, but wins you over with her ‘item’bomb‘ simplicity.

Gauhar Khan ‘reveals’ a lot more, of her acting skills that is.

Director Habib Faisal takes you into the heart of this small-town story, creating a politically-divided Almore with elan – penning gripping characters (a rigid and arrogant Dadda, a suppressed, dukhiari Amma, two overbearing brothers), but fails to maintain the crescendo in the second half. After highlights like a sensitively shot lovemaking scene on a rusty train berth, a subtly picturized romantic song (Pareshan), and a shocking pre-interval scene, it starts falling apart like a house of cards; ultimately folding into a predictable climax.
The flatness of the second half is what takes away from the pace of a launch vehicle that could’ve been memorable.

‘Ishaqzaade’ starts with a bang-bang, but ends up firing blanks.