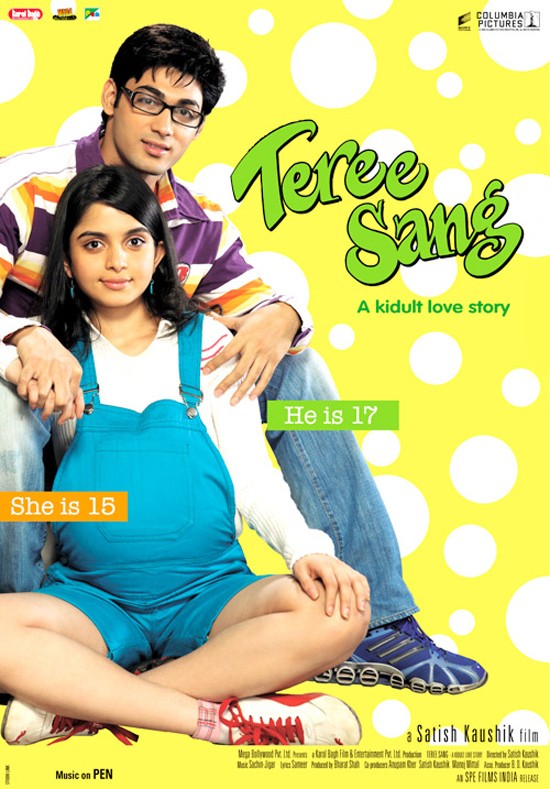 Teree Sang is copied from the Korean movie ‘Jenni, Juno’ and a host of other Hindi movies. Maahi (Sheena Shahabadi), a 15 year old rich, bubbly girl becomes friends with Kabir (Ruslaan Mumtaz), a 17 year old teenager from a lower middle class family. On a camping trip on New Year’s Eve, the drunken young couple gets into a physical relationship and Maahi becomes pregnant. Maahi decides to keep her child and the rest of the story is how they go about it.

The movie shows 15 and 17 year olds drinking and parents not even bothering if kids don’t show up at night. Satish Kaushik and Sushmita Mukherjee, who play Kabir’s parents, don’t even care if their son has not shown up at home for two days and don’t even try to search for their kids after they elope. The kids are so casual even after having a physical relationship and Sheena emotionally blackmails her mother (Neena Gupta) to let her elope. Kabir and Sheena do menial jobs but live in a nice mansion that is conveniently available for them. They have toys and everything else and have no problems wearing the nicest clothes.

When Sheena is taken to a doctor, the doctor does not even bat an eyelid seeing a teenage mother and does not even seem curious about them. Did not know that teenage pregnancies were so common in India. It has become a fashion to just rip off foreign movies and not even think if they actually make sense in India. In an effort to be different and to make a multiplex movie we have a movie with a serious issue being treated with such frivolousness. The movie ends up with some intentional and some unintentional comedy.

The movie borrows from the Korean movie ‘Jenni, Juno’ and also from Hindi movies like Qayamat Se Qayamat Tak, Maine Pyar Kiya and Kya Kehna. There was a Telugu movie called Chitram (2000) which had dealt with the same issue and while it was not a great movie either but it at least was much better than this one. It’s a surprise as to why Satish Kaushik, who has remade South Indian movies in the past, chose not to remake that one instead. The movie ends with a lot of sermonizing.

Ruslaan Mumtaz is ok and Sheena Shahabadi comes off as immature, which what most girls at 15 probably are, but it looks ridiculous when she does not seem serious even after deciding to keep the baby. It looks like the kids are playing some mom and pop game with toys and they look like they are on a picnic. Satish Kaushik overacts and cracks silly jokes and is a bit annoying. He seems to act as he does in David Dhawan movies. Sushmita Mukherjee repeats her TV serial act. Neena Gupta seems disinterested and Rajat Kapoor is ok.

The cinematography is ok but the dialogues are ridiculous. Satish Kaushik takes a serious subject and makes a mockery of it by treating with such casualness. The movie looks like a regular rich girl – poor boy teenage love story with teenage pregnancy thrown in. The director cannot resist trying to put some silly comedy from time to time. What can you expect from a director who does not know the meaning of Kidult and uses it on the movie poster. Kidult means “A middle-aged person who participates in youth culture and activities traditionally intended for children”. Satish Kaushik, who is supposed to have researched for this movie, should first learn what kidult means.