The Untouchables Review by Sputnik 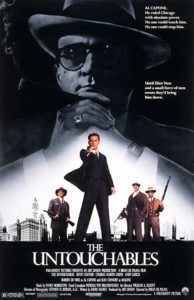 Federal Agent Eliot Ness sets out to stop Al Capone; because of rampant corruption, he assembles a small, hand-picked team.

Brian De Palma’s movies always have style and here he uses too much style at times in this movie. There is a cradle on stairs scenes which is a homage/tribute to a similar scene from this old movie called Battleship Potemkin (1926) but the scene goes on for so long and is so deliberately set up that it becomes annoying. That scene was copied in the Hindi movie Tezaab. Similarly there are some scenes like Kevin Costner chasing this villain which is very filmy and so is another shooting scene on the bridge. Cinematography is good and art direction is excellent recreating 1930s Chicago.

Never really liked Kevin Costner. He acts the same way in all his movies whether this or JFK or Field of Dreams. He has such cheesy dialogues at places and is so bad in some scenes like the scene where he says something to Al Capone at the end or the scene where he says something to a guy he just killed. Robert De Niro was excellent as Al Capone. I think he should have had more screen time and should have been nominated for an Oscar for Best Supporting Actor.

Sean Connery was very good and he won a Best Supporting Actor Oscar for this but I am not sure if his accent was right. He was talking in his usual Scottish accent. Andy Garcia and Charles Martin Smith were ok.

The movie was deservedly nominated for Oscars for Best Art Direction – Set Decoration (which has now been changed to Best Production Design) and Best Costume Design. The background score was good too and it was also nominated for Best Original Score.

P.S. This review is expanded from from a comment that I made back in December 2013.