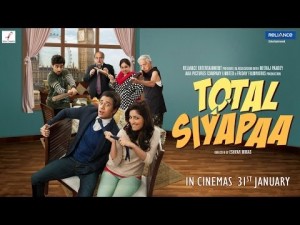 It’s a film that brings in some of the tasteless jokes together only to justify its dimwit characters. So you have a miser guy who choose to buy a bouquet but ends up getting a free one, then you have a missing identity who suffers from amnesia so that he can misconstrue a prostitute to be his mother and than a wife, or you have a guy bursting in hatred against Pakistanis who are his neighbors. If this wasn’t enough, you have a cop, manifesting to be a Mr.Bean with his expressions, who smells terrorism if he hears “bomb” by a passing guy.  TOTAL SIYAPAA could have been a joyride if these characters were brought together to make a crazy ride, like that BHEJA FRY, which was meticulously written and mostly played with its characters and not the story.

The film starts pretty decently when the lead pair is trying to expose that our hero is from Pakistan. The humor is nicely melted in conversations. But the film clearly lost its plot just after first 30 minutes. The pace drops considerably and the on-goings is too unreal to tickle you. The dialogues in such films do have a strong impact but here you miss wit and cleverness. Posed as situational comedy, TOTAL SIYAPAA is a film that turns out to be a headache in the in the first half itself.

The film drags every plot of it to an unforgivable extent. Like that scene involving a prostitute trying to get on to Anupam Kher. Its such a long scene that I felt I saw one television daily-episode. I did some speculation that by the end the film will try to bridge all the gaps only to convey “thank-god-its-all-good-now” kind of climax. And I was spot on.

There are some scenes which I genuinely found laughworthy. Like the one in bathroom which is a homosexual gag that made me laugh hard. Or the one where, amidst a tense moment, Kirron Kher accuses Ali afar to rob away a frozen soup box. But unfortunately, you can count on your finger tips the number of times you laughed in the film. Its that low count.

The music is refreshing. The three songs are welcome distraction. The dialogues miss any kind of humor. The director fails to invent innovative scenes which could have pulled off some laughs.

Sadly, even the good-looking pair could not bring much to the table. Having dozen of characters in the film didn’t really did the film any good. Its only Kirron Kher’s character and her performance which is endearing in a film filled with nincompoops.

It’s an honest attempt to make you laugh, but that just wasn’t enough.