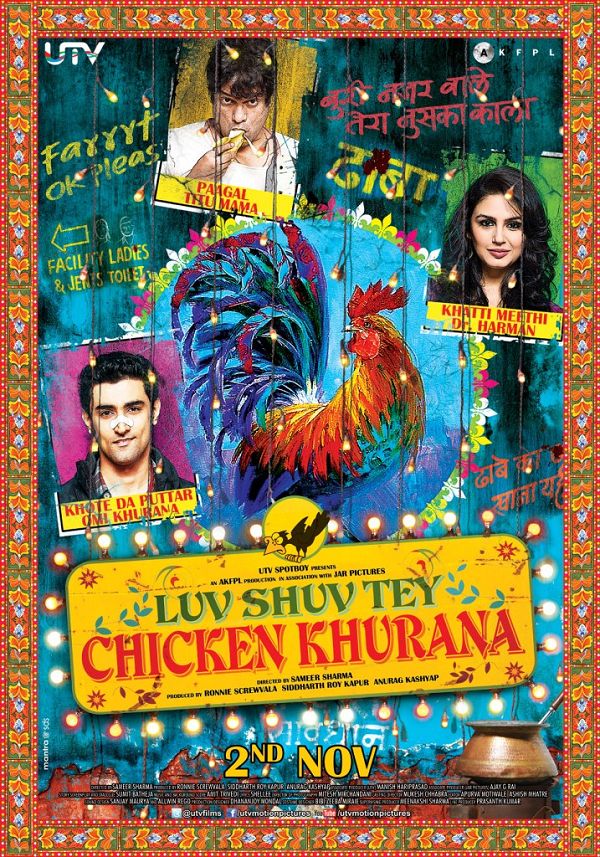 In Mumbai, one of the popular eateries is known for serving yummilicious methi malai gosht. Its recipe is kept confidential. I am told, the recipe was known to the father, now the son knows it and I presume, it will be passed on to the next generation at the opportune time, so that the winning recipe remains restricted and confidential to the family only… Another prominent business family specializing in Indian sweetmeat and pickles keeps the flourishing formula to itself… One of India’s delectable cuisines is hugely popular in the West, a recipe that enchants the Westerners continuously…

Omi Khurana’s [Kunal Kapoor] London dream has just ended. On the run from a dangerous U.K. gangster [Munish Makhija], who he owes money to, Omi returns to his native village in Punjab, pretending to be a well-heeled London lawyer. Much has changed since Omi ran away from home a decade back after stealing money from his doting grandfather, Darji [Vinod Nagpal]. The old man has since become senile and most importantly, forgotten the secret recipe of ‘Chicken Khurana’, a dish that made the Khurana dhaba famous across Punjab.

Omi’s childhood sweetheart, Harman [Huma Qureshi], is soon to be married to his cousin, Jeet [Rahul Bagga], though neither seems too happy about it. Adding to the quirkiness of the Khurana family is a free loader uncle, Titu [Rajesh Sharma], who once did a stint at a mental asylum. Will Omi be able to cover his deceit and lies for long, even as he tries to recover the lost recipe of Chicken Khurana, the family’s only hope to reclaim their pride and wealth?

LUV SHUV TEY CHICKEN KHURANA follows the trend of depicting slice of life stories in a North Indian milieu, popularized by movies like KHOSLA KA GHOSLA, OYE LUCKY! LUCKY OYE!, DO DOONI CHAAR, BAND BAAJA BAARAAT and VICKY DONOR. What makes LUV SHUV TEY CHICKEN KHURANA stand tall, like those films, is the fact that it explores a story that’s a first for a Hindi film [just a quick clarification, it’s not remotely similar to the Malayalam film USTAD HOTEL].

India is defined, amongst many things, for food. We have food for birthdays, food for weddings, food for all kinds of celebrations, food for even bereavement… Sameer Sharma chooses a delicious dish as a metaphor and along with screenwriter Sumit Batheja serves a fare that has the right ingredients [read recipe] that make a rom-com work. The humor is super-perfect, the one-lines are witty and most importantly, it succeeds in its endeavor of making you laugh at the right points. Not many movies can claim to be thoroughly entertaining from start to end. LUV SHUV TEY CHICKEN KHURANA is one enjoyable ride from its first frame to the concluding one. Brownie points to Sameer Sharma for that!

LUV SHUV TEY CHICKEN KHURANA shines purely on the basis of its writing, execution of the written material and performances. The film finds find humor in the most ordinary places and situations and though the pacing gets sluggish at times, Sharma culminates the film with a heart-felt episode that makes you disregard the minor aberration. In fact, the final moments of the film are simply outstanding, with every character confessing what they had kept concealed from each other.

Amit Trivedi’s tunes are offbeat, with ‘Kikli Kalerdi’ and ‘Luni Hasi’ being the pick of the lot. I’d like to make a special mention of the dialogue, which are soaked in humor and are thoroughly pleasant. Mitesh Mirchandani’s camera captures the lush green locales of Punjab with flourish.

Each character is well etched here, with everyone putting their best foot forward. Kunal Kapoor is a complete revelation. The actor is charming all through, but shines luminously in the penultimate moments of the film. The emotional sequence proves he can carry off the tough moments with dexterity. Huma Qureshi is an absolute delight to watch. Spontaneous and natural to the core, she gets her role right and how. This is another opportunity, after GOW 2, she takes full advantage of.

Rajesh Sharma’s performance can be described in just one word: Fantastic. What a supremely talented actor. He brings the house down every time he makes an appearance. Dolly Ahluwalia is too good. She sparkles in a succinct but significant role. Rajendra Sethi is first-rate, as always. Vinod Nagpal doesn’t get lines to deliver, but it’s a delight to watch him on the big screen after a hiatus.

The film also works because the supporting cast is terrific and kudos to the casting director Mukesh Chhabra for getting it right yet again. In fact, Mukesh also pitches in a likeable performance. Another actor who stands out, during the final moments yet again, is Rahul Bagga. He’s super when he professes love to his soulmate Anangsha Biswas [who does a decent job]. Seema Kaushal, as Rajendra Sethi’s wife, is another talent that grabs your attention. Munish Makhija is commendable, enacting his part with perfection. Vipin Sharma is proficient.

On the whole, LUV SHUV TEY CHICKEN KHURANA is a joyride from start to end. The film works because the written material, the execution of the subject and the performances complement each other wonderfully. This delectable dish ought to be savoured for certain!

Ratings: Three and a half star.