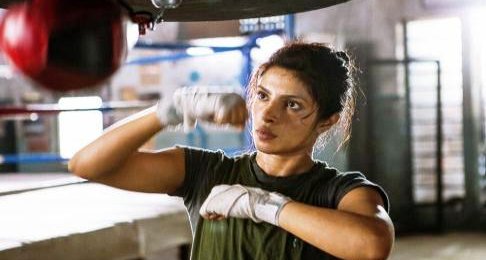 In one scene in Mary Kom, Priyanka Chopra, playing the titular boxer, has just received a letter in the mail with promising news. Too excited to wait till her husband is out of the shower, she relays the information to him even as he cranks open the bathroom door a little, still dripping wet, to respond to the news. Giving him the once-over, she asks mischievously, “Aaj paani thoda thanda tha kya?” (“Was the water too cold today?”)

This throwaway moment, which reveals a surprisingly cheeky sense of humor on her part, is one of very few unpredictable glimpses into the personality of this five-time world champion. Alas, little feels original or unexpected in this sterile film, whose script appears to have been cobbled together from the data on her Wikipedia page.

Early on we learn that this daughter of a poor rice farmer in a small village in Manipur is fascinated with boxing. She has a quick temper and gets into fights with the boys. When she chances upon Coach Narjit Singh (Sunil Thapa, one-note), who runs a boxing academy in a nearby town, she begs him to train her professionally, thus getting on the wrong side of her disapproving dad who is concerned that she will bruise her face and hamper any chances she has to be married.

From this point on, the film rushes through her early career. She goes from amateur to state and then national level champion within minutes. But it all feels hurried, and aside from a stray southpaw reference you never get the slightest sense of what defines her as a boxer, or what her strengths are in the ring. At the peak of her success, Mary Kom marries a local footballer, Onler (Darshan Kumar, charming), and then, like Coach warned her, boxing inevitably makes way for domesticity when Mary becomes pregnant and delivers twins.

A nice scene in which she accidentally overfeeds one of the two babies because she can’t tell the twins apart is an indicator to how she grapples with parenting initially. She learns the ropes soon enough, and seems happy for a while. But there’s clearly a void in her life. In another effective scene, you get a glimpse of a hurt ego when she goes unrecognized in a bus by a young fan of Mary Kom. Spurred on by her husband who offers to tend to the kids, she starts training again and becomes determined to reclaim her past glory.

Co-writer/director Omung Kumar does a serviceable job telling a generic underdog story – a Bollywood melodrama about a woman who overcomes all odds to come out on top. But this is no ‘generic underdog story’. This is a biopic of the great Olympic medalist Mary Kom. However, from the casting of Priyanka Chopra, who looks nothing like Mary, to the mere token references to Manipur’s troubled political landscape, it becomes evident early on that the filmmakers aren’t particularly fussed about authenticity or attention to detail.

The writers use broad brushstrokes to paint pivotal characters like the supportive husband, the angry coach, and the sleazy bureaucrat from the sports federation whose bruised ego leads him to go after our protagonist. Mary herself never feels like an adequately fleshed out character. In one impulsive moment, when she can’t get a grip on her anger, she shaves her head bald. That scene has virtually no dramatic impact because the filmmakers fail to exploit it in a manner that points to Mary’s unpredictability. And yet, despite the bland scripting, Priyanka Chopra does an impressive job in the central role. Lean and lethal, she transforms herself physically, and also skillfully conveys both the rage and vulnerability that the part required.

In the end, the film ticks off each of Mary Kom’s career achievements and key personal struggles, but doesn’t tell you much more about her as a person than the innumerable headlines do. There is blood and sweat and grit in this story, but very little genuine feeling.

I’m going with two-and-a-half out of five for “Mary Kom”. It’s perfectly watchable, but never great like it should’ve been.