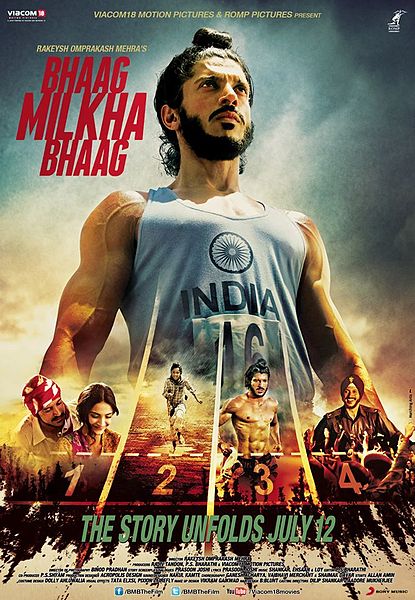 Synopsis: Bhaag Milkha Bhaag is a biographical sports film based on the life of “Flying Sikh” Milkha Singh, an Indian athlete who was a world champion runner and an Olympian.

The movie should be used in Film Schools as an example of how not to write a screenplay. The movie starts off with Milkha Singh losing in the 1960 Rome Olympics because his coach screams Bhaag Milkha Bhaag thereby reminding him of his childhood memories of partition. He is leading the race and he starts losing after hearing the screams and turning back to see. This is total BS as can be observed from the video of the actual race here. Link

Now we are treated to a long flashback by Milkha’s coach Gurudev Singh while traveling to Chandigarh to ask him to meet Nehru so that Nehru can convince him to go to Pakistan to compete there. Now Nehru must obviously not have heard of this invention called Telephone or the just recently aborted Telegram Service. Anyways this flashback which covers almost the whole movie has multiple flashbacks within it. There are some stupid comedy scenes during his initial Army training days. So Gurudev Singh knows that Milkha after drinking milk was reminded of his childhood milk drinking scenes.

Now there are some stupid scenes involving the India Blazer and then he loses a race because he was hurt by a stone. Not sure why they would allow him to run bare feet in the first place. Our official now tells Gurudev Singh that he still could not understand why Milkha did not want to go to Pakistan. So now we are treated to Milkha’s scenes at the refugee camp and his elder sister Divya Dutta’s sex scenes. Milkha takes to petty crimes and becomes bad ass and starts stealing on the train ala Slumdog Millionaire. But the grown up Milkha is no bad ass as he gets almost stripped and ass kicked by others.

While telling about why Milkha did not want to go to Pakistan our Gurudev decides he should also tell about his love story with Sonam which has no relevance with his not wanting to go to Pakistan. We are also shown how the great Milkha could drink two cans of Ghee at once to show that Milkha would have won Gold if only there was a Ghee eating completion at the Olympics. Now we are shown a scene where he is trying to escape from a ticket collector and Gurudev knows that Milkha was reminded of his childhood horrors again.

Time for some heroism by the great Milkha. After being beaten by some other Indian athletes Milkha runs with his bandaged legs and the bandages come off ala the scene from Forrest Gump where his leg braces come off. He returns home to find Sonam was married to someone else. Now time for some stupid comedy on an airplane where our great director Rakeysh Omprakash Mehra decides to do a cameo as a Pilot reminding us of the great Subhash Ghai’s wonderful cameos.

As Milkha is now in Melbourne, Australia its time for a song that sounds like an American Country song. Farhan Akhtar also decides its time he gets into his Imran mode from Zindagi Na Milegi Dobara and have a fling with a Australian girl and sing another song and thereby lose the qualifying race.

Time for some hardcore training scenes in picturesque mountains with a background song chanting Milkha. And time for the Indian female Swimming team member to lust after Milkha after having watched his 6 pack abs while training. She tries to seduce him but Milkha has obviously turned wiser after his Australian s/experience and declines her advances.

Time for some India Pakistan confrontation where the Pakistani coach mocks Milkha for having had to run away from Pakistan. The whole story is being told because a Indian official does not know why Milkha does not want to go to Pakistan but surprisingly the Pakistani coach already knows that. Time for another partition flashback. Milkha wins against Khaliq in a Photo finish. Time for a montage of his races and his record breaking race for which there were so many training scenes is shown through a paper clipping. Song time.

As the games in Pakistan are announced time for another partition flashback. The main flashback ends and after some chai biscuit Milkha is given the message to meet Nehru and the great Nehru convinces him in faster than it takes to make Maggi.

Milkha returns to his childhood home ala Hrithik in Agneepath and time for another partition flashback. The partition scenes that haunt Milkha remind us of scene from Zanjeer which itself was copied from Death Rides a Horse. The horse rider scene also reminds of scenes from Sleepy Hollow. His childhood friend is alive and we are given the great wonderful message that “Log Bure Nahin Hote. Bas Halat Bure Hote Hai” and everything is alright. Then there is the final scene – the race between the great Milkha, the underdog who already the defeated the Asian Champion Khaliq earlier.

Farhan Akhtar acts well in some scenes and he is Imran from Zindagi Na Milegi Dobara in some scenes. He seems to have copied Milkha’s style of running well. Sonam looks pretty and has a small special appearance. Rebecca Breeds and Meesha Shafi are ok in small roles. Divya Dutta is ok but then she has played this Punjabi role a few times. Pavan Malhotra is very good in some scenes and he looks like he got the Punjabi part so right but then some of his scenes where he is telling the story are so bad that he ends up looking bad. Prakash Raj is ok playing a South Indian army officer. Yograj Singh is bad in some scenes and ok in some. Dalip Tahil is weirdly cast as Nehru.

Some scenes are good and Milkha’s story could have been turned into a great film but its Rakeysh Omprakash Mehra’s direction which is pathetic and totally messes up the movie. The non linear screenplay and multiple flashbacks and flashback within flashback are totally ridiculous. Milkha Singh definitely deserved a better movie than this. People who like movies like Gadar or the regular commercial movies will find no issues with this movie. They may like it and even term it great. But if you were expecting a great biopic on one of India’s great sports champion then this movie may not appeal to you.