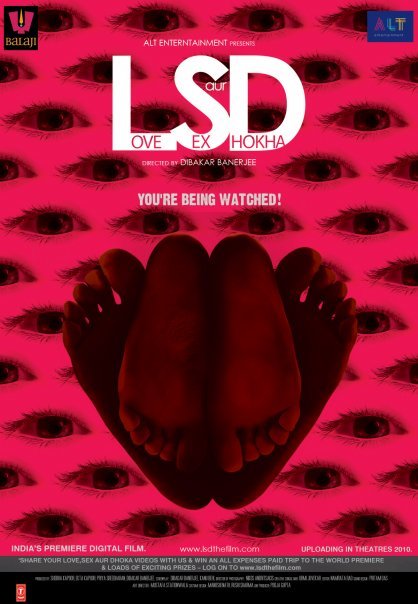 Rahul, a film school student, is making his diploma film and falls in love with his heroine, Shruti. Adarsh, who works in a departmental store hits upon the idea of making a porn clip through the security cameras in the shop. He starts to woo Rashmi, the plain looking salesgirl but starts to fall in love with Rashmi! Prabhat, a sting journalist, saves Naina who is trying to commit suicide. She had been promised a music video by Loki Local, India’s reigning Bhangra Hip Hop star but the video finally went to a Russian blonde. Prabhat and Naina plan the final sting where Loki will be caught on tape trying to buy footage of his indiscretions.

The first segment ‘Love’ is shot from the point of view of a video camera ala Cloverfield and the final scene where the video camera starts playing previously recorded footage contrasting the current situation is from Cloverfield. The second segment ‘Sex’ is shot entirely from a surveillance camera ala the movie Look. A couple of scenes like the one where the two guys are goofing around and the sex scene in the storage room seem to be from the movie Look. The last segment ‘Dhokha’ is shot through hidden cameras. The three segments are connected through the store similar to how most of the characters run into each other at the gas station in the movie Look but is also inspired from the movie Amores Perros.

Now the flaws. Rahul always has to have the video camera on and is shooting all the time so that we can see what’s happening. Now why would the father of the girl let him videotape when he is scolding them? Now security cameras do not have great video quality and usually have no audio but the second segment has good video and audio quality. Prabhat, in the third segment unbelievably has the video on when he is trying to rescue Naina.

The first part is basically a spoof of DDLJ and the diploma film that Rahul is making is another spoof of DDLJ. There is a line where Rahul says that he is a Dilwala and that he is not going to run away but he gets married to Shruti in secret and they do not even inform her parents which seems completely antithetical to DDLJ. If this part was shown in a serious way with it almost mirroring DDLJ it would have made more sense.

But it looks like Dibakar wants to take potshots at Adi and DDLJ. Now this is somewhat hypocritical because Dibakar’s movie Khosla Ka Ghosla itself had an unrealistic second half. If some one tries conning a real estate dealer like Khurana in real life by selling him a government land they would most probably end up getting killed by his henchmen and buried under the same land. Even Dibakar’s previous movie Oye Lucky! Lucky Oye! had a thief who is loved by everyone including the cops when in reality a thief caught stealing is usually thrashed mercilessly by the mob and there even have been a few cases where they were beaten to death.

Screenplay by Dibakar Banerjee and Kanu Behl is good for the first two parts but the third segment does not work at all. The second part of the movie is the best part of the movie as the characters seem very real and and the dialogues are excellent in this part. Cinematography by Nikos Andritsakis is good and gives the movie the right feel for the different segments. Film Editing by Namrata Rao is ok. Neha Chauhan is excellent as Rashmi. Raj Kumar Yadav is very good as Adarsh, who thinks he knows everything and is constantly telling Rashmi what to do. Anshuman Jha, Shruti and Amit Sial are good. Arya Devdutta and Herry Tangdi are ok.

Dibakar Banerjee’s direction is ok but this gimmick of movie through various cameras is what makes it experimental and not an easy watch. It might be difficult for a lot of people to stomach the deliberate out of focus video and weird camera angles. In order to convey the whole story he has to come up with contrivances like the camera is always rolling and that the surveillance camera never misses anything. In fact in the second part we are shown a scene from storage cam and when the characters move to the main store we are shown what is happening through the main store cam so we never miss any continuity. There are too many cinematic liberties taken to tell us the whole story and the movie would have been much better without this gimmick.