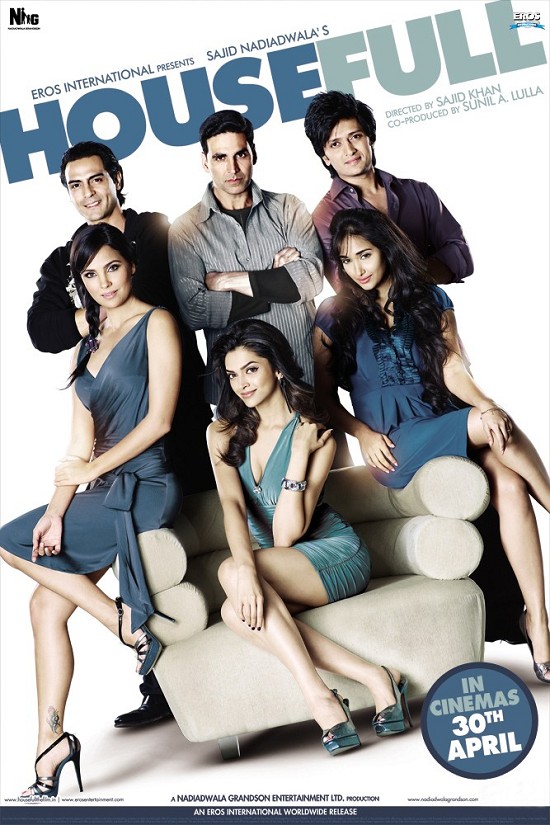 ‘Housefull’ is a supposedly romantic comedy entertainer which narrates the story of Aarush – the world’s unluckiest man. Being jinxed he believes his bad luck can vanish if he finds true love. In this quest for true love how one lie leads to another and how different people come together adding even more confusion to this supposedly hilarious comedy of errors resulting in total chaos and mayhem. For a movie claiming to be a comedy there are hardly any scenes in the movie that are funny. They are a couple of scenes where you might chuckle like the one where Aarush calls Sandy ‘Saandee’ or a couple of gay jokes which seem to be the latest fad in Bollywood.

Housefull plagiarizes scenes from so many movies. The basic premise of a loser is from the movie The Cooler and Sajid does not even try to hide his source. The first scene has him working in a casino as a Cooler just like William Macy in the original. The wife dumping him on his Honeymoon scene is from the movie Along Came Polly. The unwanted friend who creates trouble is from You, Me and Dupree. The monkey slapping scene is from Night at the Museum and the tiger scene is from The Hangover. Sandy’s brother (Arjun Ramphal) doubting Aarush and conducting the lie detector test is from Meet the Parents. Boman Irani’s character does a Kantaben track from Kal Ho Naa Ho. The walking on fire to impress Sandi is from Rab Ne Bana Di Jodi. The whole chaos at the house track is from All the Best.

Screenplay by Sajid Khan, Milap Zaveri, Vibha Singh is absolutely pathetic and dialogues by Anvita Dutt Guptan are not funny at all. Randhir Kapoor a multi millionaire marries his only daughter to Aarush because he is an Indian. The Lara Dutt son track is conveniently forgotten after a couple of scenes. The vacuum cleaner scene is pathetic and goes on like forever. It is downright racist to say ‘Dambar Ka Tukda’ and then show a close up of an African kid. Santa and Banta supply laughing gas accidentally to the Buckingham Palace and the climax with everyone laughing is silly and ridiculous.

Music by Shankar-Ehsaan-Loy is mixed with some good songs and some bad. Papa Jag Jayega, Oh Girl You’Re Mine are good. Sunidhi Chauhan is brilliant in the song ‘I Don’T Know What To Do’ but Shabbir Kumar’s voice is annoying and his singing too. There is also an irritating song called ‘Panauti He is such a loser’ which keeps playing often in the background. Choreography by Farah Khan is pretty good. Cinematography by Vikas Sivaraman is pretty good with scenic locations.

Akshay Kumar (wearing a wig?) is either in a drugged state or is jumping up and down like a little kid. Akshay who is not a bad actor and who has done some good work in the past like Hera Pheri and Khakee needs to stop doing these brain dead comedies. He was playing a loser in his previous movie De Dana Dan too. Deepika looks good but cant act and she can’t even say the only Telugu line properly while playing a Telugu girl. Lara Dutta is annoying with her constant screaming and screeching and seems like she used the left over wardrobe from Blue. Riteish who is normally good in comedies is not funny this time. He gets some bad lines to mouth and he needs to stop the whole pretend gay act. Boman Irani plays a stereotypical Gujarati but manages to do well by modulating his voice. Randhir Kapoor cannot even laugh properly in the laughing gas scene and he should stay retired. Wonder why he had to make a comeback with this. Chunky Pandey is annoying in a small cameo. Arjun Ramphal acts well in a good role and surprisingly comes out as the best among all these.

Sajid Khan who used to do the immensely funny show Kahne Mein Kya Harj Hai cannot make a decent comedy. He used to show scenes copied from Hollywood. May be he should restart the show as he has a whole season’s worth of material from Houseful. Sajid also used to do Ham scene of the week where an actor would repeat a word and he would count it. He should count ‘Panauti’ in Houseful which is repeated like a thousand times. The first rule for a comedy movie is that it should be funny and the problem with Housefull is that it is not funny. Its like an Action movie with no action. Housefull is recommended for those who would laugh at anything or those who get easily satisfied with a couple of songs, couple of jokes and some good looking girls. For those who like to watch good movies they can skip this. If someone still wants to watch it they should may be watch the pirated version because movies like this which pirate (steal) scenes from other movies deserve only that.