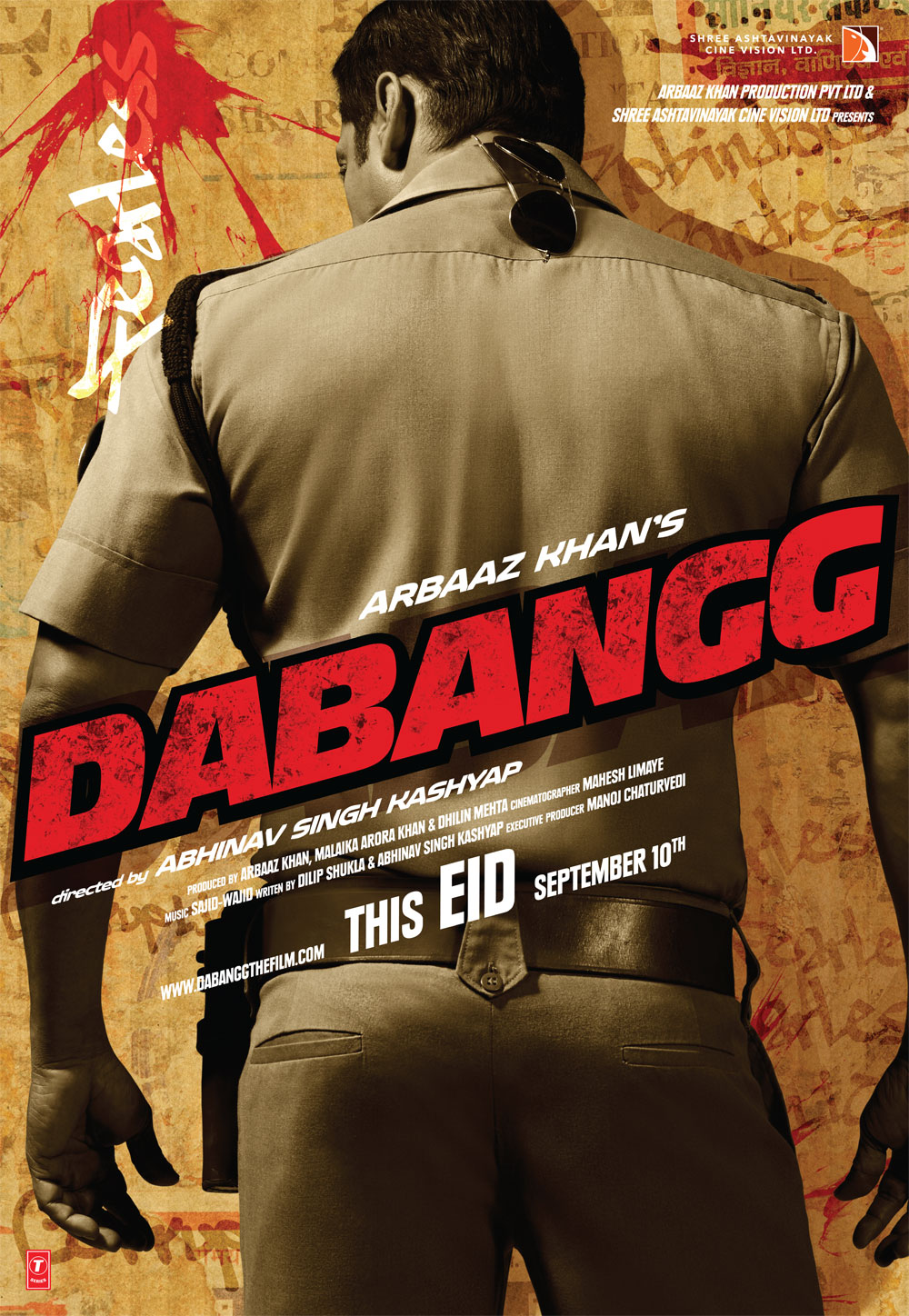 Dabangg is the story of Chulbul Pandey (Salman Khan), a totally fearless but corrupt police officer with unorthodox working methods. After his mother’s (Dimple) demise and an unsuccessful attempt to mend wounds, Chulbul snaps all ties with his stepfather (Vinod Khanna) and half brother Makhanchan (Arbaaz). Rajo (Sonakshi Sinha) with her unique perspective of life enters his world and turns life upside down. Cheddi Singh (Sonu Sood) pits one brother against the other. Makhanchan ends up carrying out acts oblivious to the consequences. When he realizes he has been used, he turns to Chulbul. Will the brothers be able to thwart Cheddi Singh is what the rest of the story is about.

It seems odd that someone would cancel his daughter’s wedding because it was hijacked or that one could take explosives so easily to a minister’s house. There is also a scene at the police station where Chulbul tells Rajo that her father tried to rape someone. It seems very absurd that a rape accusation is used so casually and that Chulbul insults her father like that. When the movie has Chulbul Pandey as an invincible superhero, Chedi Singh comes off too small a villain. It seems like he is a henchman of a bigger villain but there is no bigger villain in the movie. The fight then between Chulbul and Chedi Singh becomes totally one sided.

There is not much of a story in the movie written by Abhinav Kashyap and Dilip Shukla. If one is looking for a great story/screenplay or is looking for logic they will surely be disappointed. Dialogues are very good with some great one liners. Cinematography by Mahesh Limaye is pretty good. Action by Vijayan is very good though some of the fights are inspired or copied from movies like The Transporter and Flashpoint. There is the usual Matrix inspired stuff too. It seems odd that the color tone changes during the final fight. Not sure it is intentional or just a case of bad vfx. The violence is more comic book than real and it never takes itself seriously.

Music by Sajid Wajid is pretty good. The best song in the movie is ‘Tere Mast Do Nain’ and is excellently choreographed. Salman dancing in the market place does remind one of ‘Haule Haule’ from Rab Ne. ‘Munni Badnaam’ by Lalit Pandit is a catchy item number and is choreographed well. ‘Hud Hud Dabangg’ seems to have Omkara’s title song hangover. The rest of the songs seem ok with respect to the movie setting. Background music by Sandeep Shirodkar is pretty good. The constant theme that plays seems to be at least inspired if not copied from one of the movies El Mariachi or Desperado.

Salman is excellent as Chulbul Pandey. This is arguably his career best performance and he is totally in character even when dancing. While he is great with the one liners and the comic scenes he is good at the emotional scenes too. Sonakshi Sinha makes a fine debut though she looks odd in close ups with her big face. Her facial expressions are very good where she toys with Salman in the ‘Kalmoohi’ scene. Arbaaz is ok and the talented Mahie Gill gets only a couple of scenes. Vinod Khanna is good especially in the final scene at the hospital. Dimple is ok and Om Puri is decent. Sonu Sood is very good as Chedi Singh but his character seems to not have been fleshed out properly. He is excellent especially in the scene where he tells Om Puri how he does not like being called a villain or the ‘phus-phus’ scene. Mahesh Manjrekar is wasted.

Abhinav Kashyap’s direction is excellent. The basic plot is of an old masala movie and it is set in a realistic setting ala Omkara but it is more of a Robert Rodriquez movie. The relationships and the problems between them are subtle unlike the old masala movies. The only thing over the top in the movie are the action scenes. The movie is in the genre of movies like Desperado where it is all cool stylistic action and the hero hardly gets hurt. The Spanish guitar riffs seem like a clue. The movie is definitely entertaining and worth a watch just for Salman.