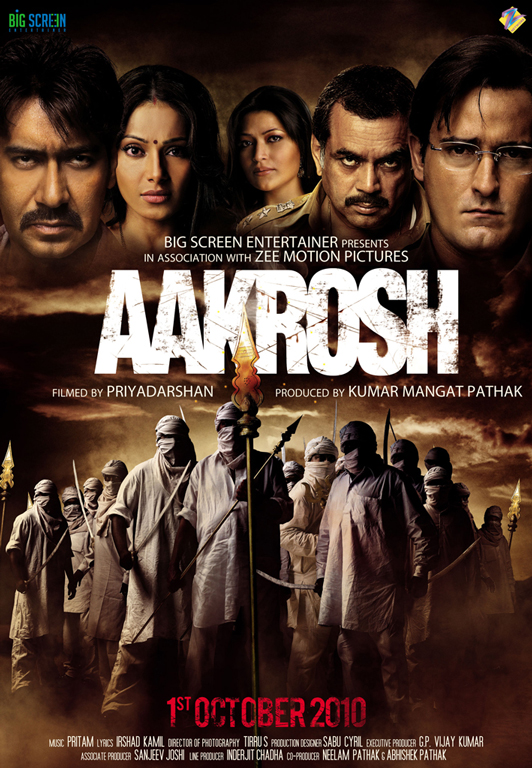 Three students of Delhi University go missing in Jhanjhar. CBI officers Sidhant Chaturvedi and Pratap Kumar are sent to investigate. Pratap tries to use his charm and smartness to crack investigation whereas Sidhant has a very no non-sense, direct approach investigation. Investigating becomes a tough task for them as the local police force headed by Bhura Ram run a major branch of the Shool Sena. Soon the effect of their investigation causes mayhem in Jhanjhar, with riots, burning of houses and killing of peasants in broad daylight. How Pratap and Sidhant solve this mysterious case is what the rest of the story is about.

The makers claim “Aakrosh is an adaptation from an article of Times of India during the time of 1995, the story is about Honor Killings”. The truth is that it is plagiarized from the 1988 movie Mississippi Burning starring Gene Hackman and Willem Dafoe which was nominated for 7 Oscars and won an Oscar for Best Cinematography. Mississippi Burning was based on the FBI investigation into the real-life murders of three civil rights workers (one of them African American) in the U.S. state of Mississippi in 1964. They have made corresponding changes to the original. FBI is CBI and African American becomes person of lower caste. Ku Klux Klan becomes Shool Sena and burning Crosses become burning Trishuls.

Most of the scenes are lifted from Mississippi Burning. There are some changes which make it worse. There is a scene involving pepper that is copied from Ketan Mehta’s Mirch Masala . Dialogues are mediocre. The sepia colored Cinematography reminds of the original even more. There are ridiculous action scenes where Ajay jumps across buildings like a monkey, lies down under a running train and rides on the top of a SUV. Scenes like these are fine in a movie like Dabangg but they look totally out of place here. The second half of the movie goes completely downhill. The police lathi charge scene is the worst.

Music by Pritam is mediocre. ‘Isak Se Meetha’ sounds like a poor version of ‘Namak Ishq Ka’. Saude Bazi sounds like it is inspired or plagiarized from some foreign song. With Pritam as the composer it wont be a suprise if it is the case. Background music is annoying. Ajay is good but this is a role that he can probably do in his sleep as he has done similar roles in the past. Akshay looks ridiculous with a wig and hams as always. Paresh Rawal overacts. Bipasha seems totally out of place and Reema Sen is horrible. Amita Pathak cannot act and the rest of the cast overacts.

Priyadarshan’s direction is horrible. He makes a mockery of the honor killing issue and the movie Mississippi Burning.. There are masala action scenes and the ending is frankly ridiculous. The movie is boring and one just loses interest in the proceedings. Do yourself a favor. Watch Mississippi Burning instead because it is a great movie with excellent performances by Gene Hackman and Willem Dafoe.