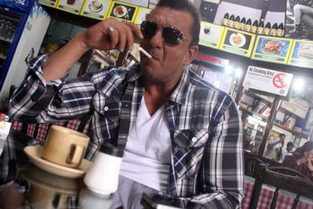 Story: Mumbai Police forms a Department beyond the law to end the underworld – what happens when this Department gets corrupted?

Like other Ram Gopal Varma (RGV) films, Department has an idea – a force to finish the underworld by stepping over the law’s boundaries. But like other RGV flicks, this one also blasts itself out of the water, leaving you savouring jarring camerawork, flimsy acting and over-the-top violence. Inspector Mahadev Bhosle (Dutt) creates Mumbai’s department to battle, ahem, mafia dons Mohammad Ghori and Sawatiya (Raaz). Bhosle inducts Shivnarayan (Daggubati) and with skulls crashing on walls, children flung out of windows and criminals impaled on rods, they take on the underworld. So far, so gross, but the film pulls along, powered largely by Daggubati whose smokin’ machismo holds Department together – but not for long. That’s despite Bachchan popping up as don-turned-politico Sarjerao Gaikwad, all silvery hair, dark glasses, manic laughter and a tinkling bell. Bachchan’s clearly having fun – but few viewers are.

That’s because Department, which should’ve been a taut, tense encounter between three strong men, is instead ripped to shreds by too many weak actors given puzzlingly large roles. There’s a most non-don-like Raaz, living in a shed, sporting an enviably slender waist exposed by mysteriously thin dhotis. His sullen sidekicks DK (Singh) and Naseer (Shalini) make one of the most unattractive screen duos ever. They mouth lines banally, shoot bullets expressionlessly, blow smoke dully into each other’s mouths, yet have more screen time than Bachchan even. Others – like Shiv’s wife Bharti (Sukhani, pleasant) – have
little to do except dodge those bullets and bodies.

The violence might even have clicked, considering the tale’s twists – but crazy camerawork makes you forget all that. Varma’s experimented, placing multiple cameras at different angles, treating you to close-ups of bottles pressed to mouths, lips sucking cigarettes, zooms up Dutt’s hairline. The camera even flips upside down, puncturing the tension that should’ve vibrated between Bachchan and Dutt. One line – “Chamatkaar ko namaskar” – nails it. You stagger out sensing something wasted – Nathalia Kaur’s item number’s more hideous than hot, the prettiest thing around is a translucent tea-cup, the action is mind-numbing. Losing the plot and three strong stars, Department shoots itself in the foot.