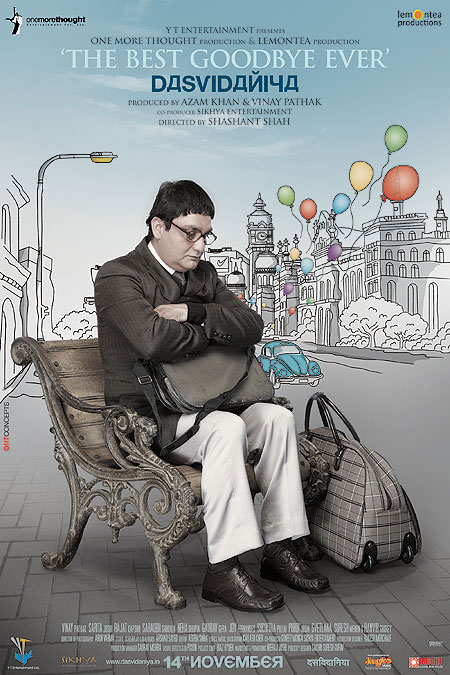 Dasvidaniya is strictly an average fare. The story is inspired from the movies My Life Without Me and Bucket List. Vinay Pathak is a 37 year old guy who works as an account manager and makes to do lists. He is unmarried and lives with his mother who is only interested in TV serials. His boss always scolds him and he is ridiculed by his colleagues. When he goes to the doctor for a stomach ache he finds out that he has stomach cancer and that he has only three months to live. His dialogues here are the same as Jimmy Shergill’s in Munnabhai M.B.B.S.

He is very depressed at this point when Ranvir tells him that he is a loser and better off dead. His alter ego then shows up and tells him to make a list of things to do before he dies. The rest of the story is how he completes his to do list.

There are some good scenes in the movie. The one where he buys the car and offers a lift to the sales girl. The sales girl then goes off with her boyfriend and he says to himself that he should have bought a bike instead. The best scene of the movie is undoubtedly the dumb charade scene between Vinay and Neha Dhupia.

There are some scenes which are just stupid. The scene where he meets Neha Dhupia. When she gets a call and says ‘Maa’ he is releived and then suprised to find that she has a kid. If she is the same age as him (they are classmates) then it would have been a surprise if she hadn’t been married. The whole Rajat Kapoor track is totally ridiculous with two 37 year olds saying G9 and Gunmaster stuff. The dialogues about Mithun’s movies looks like the scene is from Bheja Fry. The whole guitar teacher track is unnecessary with Vinay trying to learn to play the Kal Ho Na Ho title song. The brother track looks totally contrived and the tantric track is ridiculous.

Vinay’s performance is good but the movie lacks star power to hold the viewer’s interest. Neha Dhupia and Gaurav Gera are ok. Rajat Kapoor’s role and performance is the same as in his other movies. Its just getting monotonous.

Though the premise of the story is interesting, cliched screenplay and uninteresting subplots make it an average fare.