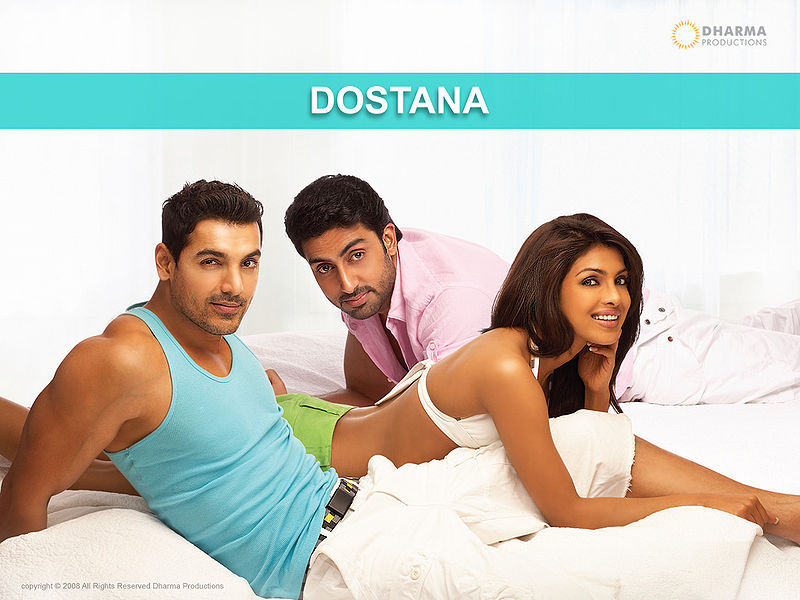 Dostana is a ridiculous movie. It is the worst movie of the year. It tries very hard to be funny but it isn’t. The Kantaben track in Kal Ho Na Ho was funny but here none of the jokes are funny. It copies scenes from Friends, The 40 year old Virgin and many more hollywood movies but guess what, it is still not funny. The movie is crude, cheap and vulgar. It has a very silly story to begin with. Abhishek is a male nurse and John is a fashion photographer. They both pretend to be a gay couple to rent rooms in a condo for 2000 dollars a piece when a single bedroom apartment rents at 1500 dollars in reality. They file for same sex residency when there is no such thing in US.

They both fall in love with their roommate Priyanka Chopra. They both try to upstage each other to win her over but Priyanka likes her boss Bobby Deol. They try to mess up their relationship and all the misunderstandings that ensue is what Dostana is about.

The movie has amateurish dialogues. Tarun Manshukhani and Karan Johar want to remind the audience that they are watching a Karan Johar production by having scenes and dialogues from Kuch Kuch Hota Hai and Kabhi Khushi Kabhi Gham as if they are some great classics. The Shilpa Shetty song is good.

John is ok but Abhishek overacts a lot. If he had not been Amitabh’s son he would not have survived this long in the film industry. Abhishek looks like he has’nt had a bath in years with his unshaved look. The only apt dialogue in the movie is when John calls Abhishek baal ki dukaan. Priyanka Chopra looks good but her acting is getting monotonous. She cant act and its always the same expressions. Kiron Kher hams up and so does Boman Irani. Bobby is ok.

It seems that the director and producer’s only intention was to make a movie about gays and they try to push the envelope as much as they can. The movie has insipid screenplay and stupid direction. Its just a waste of time and money. Say Na to Dostana.