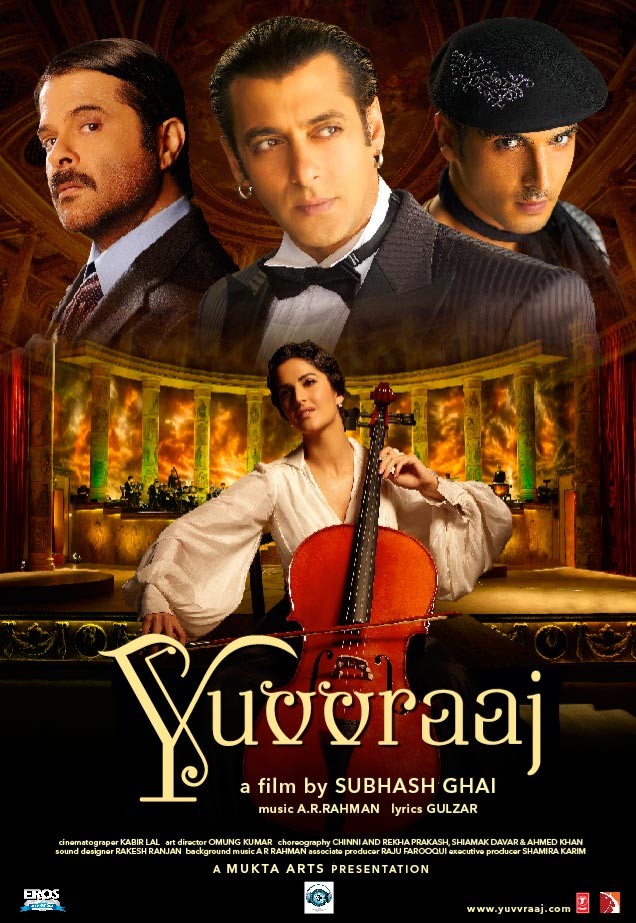 Yuvvraaj borrows its premise from Rain Man and makes a mockery of it. Where Rain Man was a great movie with great performances by Dustin Hoffman and Tom Cruise this one’s a torture. The story is narrated to us by this song writer in an Austrian Orchestra (why is she the narrator?). Salman is a chorus singer and his girlfriend Katrina plays the cello. Salman wants to get married to Katrina but her father Boman ridicules him. Salman is the son of a multi billionaire who was thrown out of his house by his father for beating up his autistic, elder brother Anil. After Salman’s father dies he signs a contract with Boman that he wil get rich in 40 days or else he can get Katrina married to an other guy.

Salman goes to London to claim his share of the property. He finds that Anil is still mentally like a kid and his younger brother Zayed is a spoilt brat. The father leaves all of his property to the eldest son. Salman and Zayed scheme to get their share of the property. Salman brings Anil to Austria and how brotherly and family love changes Salman and Zayed is what the rest of the story is about.

You have 80’s melodrama with the evil Mama and mami and the useless cousins. We are expected to believe that the father who threw the son out has the mama, mami and the cousins in the house. We are led to believe that Hindi is the language spoken in Austria as all the austrian characters speak in pure hindi and they sing in Hindi. The car scenes remind you of those old movies where the actors pretend to drive and the scenes at the back move. The scene where Salman has to go to Boman and beg him to operate on his brother is ridiculous. We are supposed to think that people have to request doctors to perform operations in Austria. Boman Irani dancing in the final scene is ridiculous.

At the outset you know what to expect from a Subhash Ghai movie. The first song Tu hi to mera dost hai goes in for a literal picturization of the lyrics with Salman flying like a superman with some tacky special effects. This song can be called fantasy in fantasy. The narrator is narrating the story about Salman and he dreams about singing as the lead singer and then fantasizes in the song while singing.

The songs are good and situational. Shano Shano, Tu Muskura and Dil Mil Jaane Do have been picturized well. Subhash Ghai goes in for grandeur in his songs as always. A R Rehman is back to his best giving music that only he can. Gulzar’s lyrics are good except for Mastham Mastham. The song Mastham Mastham is totally unnecessary in the movie. The only saving grace of the movie is the music.

Anil Kapoor acts well but this is just a repeat of his Raj Kapoor imitation from Eashwar and Kishen Kanhaiyya. Salman was never a great actor but atleast he was tolerable. He has become annoying off late. His performance is irritating with his stupid, constipated expression and sobbing and crying. He is so stiff with his big physique and cant dance. Katrina Kaif doesn’t have much of a role. She is expected to look pretty and she does. Zayed Khan can’t act. Boman Irani is annoying and Mithun is ok.

Subhash Ghai was always a bad director except for Karz and Meri Jung. He always wants to make movies on a grand scale with stupid old school melodrama. Perhaps he should begin with a good story and concenrate on extracting good performances from his lead actors and getting rid of those cliched evil mama, mami characters.