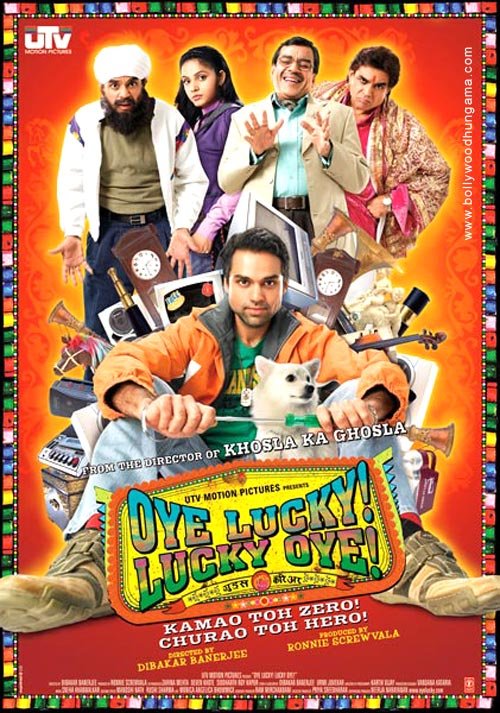 Dibakar Banarjee is not so lucky this time. Dibakar Banerjee succeeded in making a good movie ‘Khosla Ka Ghosla’ but this time he fails. Oye Lucky! Lucky Oye! is the story of a thief who steals for money, fame and love. The teenager Lucky (Manjot Singh) steals a bike from his friend’s garage to take his girlfriend out to dinner. The grown up Lucky (Abhay Deol) enjoys stealing and takes pride in being able to steal and getting away with it. He even steals from the house of the TV journalist who runs a most wanted show.

The first few scenes involving the teenage Lucky are very funny especially the hotel scene where he takes his girlfriend out to dinner. The bar scene with Dolly is good and the scene where Abhay takes Neetu Chandra out is very funny too. The dog scene is hilarious. But then there are some scenes which should not be there like the whole scene where they take a TV to this house or the scenes involving the brothers or the fight scene. The whole Paresh Rawal track as Goga drags on with so many scenes which are boring. When you see the track involving Paresh Rawal as doctor, Archana Puran Singh as his wife and the kid you already know what is going to happen.

The movie has some funny situations, nice dialogues and good performances from the whole cast. But the movie is a little slow at places where nothing seems to happen and after a while Abhay stealing and getting away becomes monotonous. It looks like you are watching a documentary about the great escapades of a thief. Behind the funny situations and dialogues there is no solid story to back it up. This is the drawback of the movie.

The movie drags on and the story goes nowhere. The background music is great at places. Abhay Deol acts well and looks the part of a charming thief who has a way with words. Neetu Chandra, his love interest looks good and acts well. Manjot Singh as the young Lucky is very charming and witty and the teenage girl who plays his interest is good. There was no need for Paresh Rawal to do a triple role. His performance in all three roles is good but nothing great. Paresh Rawal as Lucky’s father is ok but it is very short. Paresh Rawal as Goga is completely unnecessary. Paresh Rawal as the doctor is good. Richa Chadda as Dolly is good. Achana Puran Singh as the doctors wife is good and the rest of the cast is ok.

Dibakar Banarjee’s direction is good at places but he should have backed up the dialogues and performances with a solid story. There is no climax, no turning point in the movie. He depicts the middle class Delhi characters very well. If only the movie had a tighter screenplay it would have been a great movie.