My Review of Ek Thi Daayan 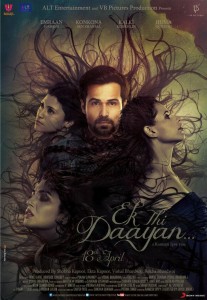 Here is my short review of Ek thi Daayan. As most of us may have guessed it, it’s a supernatural horror movie, directed by Kannan Iyer and produced by Vishal Bhardwaj and Ekta Kapoor. The expectations were decent for the movie from the audience and the movie does gives more than expected.

Emraan plays a magician, with Huma being his love interest. His magic tricks being very amusing, he is one of the most famous too. The 1st half is about Emraan’s flashback from his childhood memories and 2nd half about his present and how he deals with them.

I do not want to divulge even a bit of story, as it may tantamount to spoiler. So I would just go ahead with my conclusion without an actual review. It’s based on the witchcraft, black magic, etc. The story is breezy, enthralling and engaging. There are no dull moments! Yes, though being in a horror genre, the movie does not have dull moments. It’s a rarity which this movie could achieve in this particular genre.  It has couple of likeable songs but doesn’t spoil the flow. The climax could have been better though.

Hum and Kalki are good in their respective roles. Konakana Sen, the tried, tested and proved actor, proves once again does her bit and makes the movie chilling with her performance. Emraan is growing as an actor with every movie and he does give a good performance in the role, where most of the scenes were dominated by his female counterparts. The kids had performed well, especially the one in the 1st half.

Overall, Ek Thi Daayan is one of the best to come out in horror genre from India. After 1920, this is the movie which gave me couple of scary moments. Definitely recommended.