The rise and rise of Mayank Shekhar: Or has Sarah Palin found her literary match? 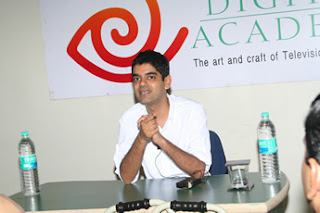 In the Wikipedia entry for Peepli Live – one of the most talked of Hindi films of late – I came across an extract from a review of the film by you: “The satire is irresistible; the subtext, compelling. And yet neither shows itself up in any form of self-seriousness. The comic writing is immaculately inspired”.

And I found myself wondering, what exactly is “self-serious”?

Perhaps, what you mean is serious.

Only, as I understand a good satire is something superficially funny but with a serious subtext. If it doesn’t have a serious subtext, then it is just a comedy not a satire. So what exactly do you mean when you say that the satire and subtext are both good, but thankfully not serious?

And what exactly is “immaculately inspired”? Now, I’ve heard of immaculate conception, but immaculate inspiration? I am still trying to figure that one out.

Now, I bear you no malice – after all, you are my Facebook friend, a friend of a friend, and best friend of a best friend, and we did have a hazy, boozy conversation at a literature festival in Mumbai several years ago. But this is what I don’t get about your rise and rise: How can you be one of the most popular film reviewers of India, the national cultural editor of one of the country’s largest selling dailies, and a winner of the Ramnath Goenka Award for Excellence in Journalism – when you have no concept of the English language, your primary tool of trade?

For example, here is what I don’t get about your review of another recent film, We Are Family:

The review begins with: “It’s this thing about soppy chick flicks, or afternoon soppy soap operas, if you will. The male character is destined to severe step-mom treatment. If he’s present at all, he usually has no say in his own destiny.” Err.. perhaps what you meant was “severe stepson treatment”. Step moms are usually disturbingly in control of the destinies of others.

“A warm, doting single mother, losing before her eyes, her life and her sweet children to fatal cancer, you can tell, is something that’ll weep any woman off her feet.” Only Mayank, in the film the mother is not losing her kids to cancer, the kids are losing their mother to cancer.

“This cultivated suaveness is but suddenly forgone as everybody begins to simultaneously weep from the screen.”

Now Mayank, I am trying very hard – very hard indeed – to imagine them “weeping from the screen”, but it is very difficult, let me tell you.

And then there are the mysteries of your review of another film Kites:

Your review begins with: “Two people (Hrithik Roshan, Barbara Mori), respectively romance another from the same family (Kangana Ranaut, Nicholas Brown), purely for the love of the money. The girl’s an illegal immigrant into the US from Mexico. The boy is the American half of various green card marriages on sale: “$1,000; honeymoon charges extra.””

“The premise from hereon could take the shape of a slight comedy of deceit (Woody Allen’s Matchpoint), or follow an aggressive drama (Anthony Minghella’s The Talented Mr Ripley).”

A “premise” does not have continuity, Mayank, so it cannot not take shape or follow. I think, the word you were looking for was simply “story” because a story can take shape.

“The said Mafiosi home belongs to one, Bob Grover (Kabir Bedi), the “owner of one of the biggest casinos in Vegas,” no less. Senators, governors etc swim under Bob’s pant pockets”.

I won’t quibble over the fact that there should be no comma following “one” because I am too busy trying to imagine people swimming under pockets. Only, I can’t. What do you mean?

“No Hindi film actor ever, I suspect, has worked himself up this much to make the super-star grade.” No, no Mayank, what you mean is “worked on himself”. “Worked himself up” means gotten himself excited.

And Mayank, these are only two reviews. And I have not yet mentioned all your mixed tenses, misplaced commas and crazy syntax. You would be such an inspiration to Sarah Palin.

But come every Friday, I’ll carry on with my helpful advice on your language bloopers.

Or else, I will be happy to pass on the numbers of some good English language tutors. After all, you are my Facebook friend, friend of a friend, and a best friend of a best friend. And what else are friends for?