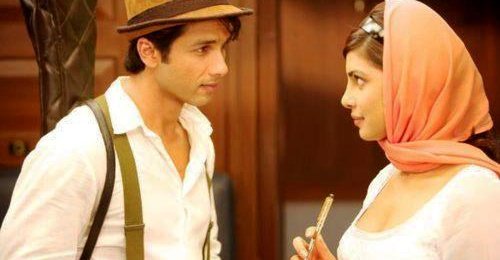 In Teri Meri Kahaani, Shahid Kapoor and Priyanka Chopra play a couple destined to fall in love across lifetimes. There’s just no getting away from each other for these two, who invariably connect in every birth, only for their romance to be repeatedly thwarted.

In 1960 Bombay, struggling musician Govind (Shahid) and film-star Rukhsar (Priyanka) begin a tentative courtship over train journeys and in film studios, unmindful of the fact that there are three people in their relationship. In current-day England, while on a rebound from a fresh break-up, Krish (Shahid, again) meets Radha (Priyanka, again) at Statford-upon-Avon; they spend a fun evening together before heading off to their respective universities where they continue their romance over Facebook, Twitter and instant messaging, until a misunderstanding drives a wedge between the young couple.

Then, rewinding all the way back to a small town in pre-Partition Punjab, Javed (Shahid, yes still him!), a cocky Lothario spends his time bed-hopping between the local women, until he falls for Aradhana (Priyanka, yes she’s back too!), the daughter of a freedom-fighter who finds him too flighty for marriage.

Borrowing its structure – three separate love stories featuring the same actors – from the celebrated Taiwanese hit Three Times, this harmless but dull film from director Kunal Kohli feels longer than its two hour running time because of the predictable nature of its episodic narrative. Kohli relies on period sets and costumes to differentiate each story, but alas, a bouffant here, a pathani there can’t take away the sense of sameness that plagues each chapter because of its consistently flat writing.

To be fair the opening love story, or the sixties romance, has a nice charm to it, despite the tacky chroma backgrounds and CGI sets. The couple’s first meet-cute moment on a Bombay-bound train is particularly enjoyable, and there are other lovely moments too, including Ruksar’s impatience to see Govind, who she assumes has landed up at the studio to see her. Channeling Chaplin in his Tramp-like get-up, Shahid Kapoor offers a winning turn as the lovable guitarist.

You’re unlikely to enjoy the subsequent love stories as much, what with all the overacting from both leads – particularly Priyanka Chopra in the modern-day portion where her American twang suddenly makes an appearance, and Shahid Kapoor in the 1910 episode who puts you off with his smugness. This final chapter, in fact, makes a complete joke of the freedom struggle, weaving corny humor and elaborately choreographed dance numbers into scenes set against the nationalist movement.

Teri Meri Kahaani doesn’t work despite potential in the premise. It feels soulless and superficial, and is unlikely to find many fans.

I’m going with two out of five for director Kunal Kohli’s Teri Meri Kahaani. In one song, Shahid and Priyanka dance inside the Globe Theatre where Shakespeare staged all his plays. Let’s just say the Bard will not be pleased.