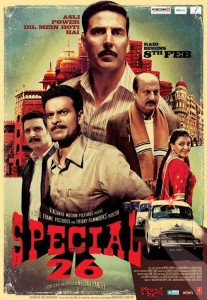 Special 26 is inspired from real events that occurred in the 80s. Akshay, Anupam Kher, Kishore Kadam and Rajesh Sharma play four con artists who rob businessmen and politicians of their black money posing as CBI Officers or Income Tax officials. The real CBI headed by Manoj Bajpayee get on their case. To pull off one final heist, a team of 26 fake CBI officers are recruited by them. Will the real CBI be able to arrest them is what the movie is about.

The movie starts off with a excellent scene of the raid on the minister’s house. The Kolkata raid scene where they run into the real CBI is also excellent. The preparation scenes and the job interview scenes are very good. The final raid and the final twist is brilliant which not many will be able to guess. There is good subtle humor in a lot of scenes.

The love story and those songs should have never been there. The songs specially look totally out of place in the movie and ruin the flow of the movie. The editor should have removed those scenes. Also there is a initial chase sequence of Manoj Bajpai which seems unnecessarily long. The first raid scene is shown multiple times which could have been avoided.

Cinematography and Art Direction are excellent except for a few scenes. A lot of attention has gone into recreating the 80s. There are some scenes near the sea which looked totally fake and done against a green screen. Background music was decent in raid scenes but it was kind of repetitive and could have been better.

Akshay Kumar is good as the fake CBI Officer. He looks old during the romantic scenes and his acting is not that good in those scenes either. Kajal looked ok when but her acting was inconsistent and her dialogue delivery seemed bad. Anupam Kher is excellent as the normally scared guy who acts very bold during the raids. Kishore Kadam is good in a supporting role and his scenes as the henpecked husband are a bit funny. Rajesh Sharma acts well but he does not have that many dialogues. Manoj Bajpai is good but he has a scowl pasted on his face for the whole movie. Wish he had avoided that. Jimmy Shergill is good. Divya Dutta is ok.

Neeraj Pandey’s direction is excellent except for the above mentioned flaws. If those were not there this movie would have been as good as A Wednesday. May be Neeraj had had to give in to pressure because Akshay is a commercial star. He is definitely a director to watch out for and this is still a very good movie if those flaws can be excused. The movie is definitely recommended for those who want to watch good intelligent thrillers.