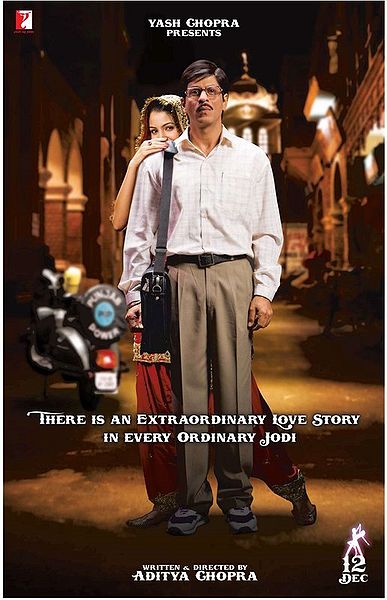 Rab Ne Bana Di Jodi is an entertainer. The movie has a wafer thin story line but good direction and great performances enhance the movie. Shah Rukh as Surinder Sahni is a goofy government employee who falls in love with the bubbly Anushka at her wedding. The groom and family die in an accident on their way to the wedding. She agrees to marry Shahrukh to make her dying father happy. They both get married but she tells Shahrukh she cant love him and will need lot of time to become normal and promises to be a good wife. She joins a dancing class to avoid boredom. Shahrukh goes to the dancing class to watch her in disguise but accidentally becomes her dancing partner.

Shahrukh becomes Raj because he wants to see her happy but he also wants her to love him for who he really is. She gradually falls in love with the Raj character. Will she elope with the Raj character or fall in love with Surinder is what the movie is about. Anushka not recognising that Raj is actually her husband, not even getting an inkling of a doubt is incredulous. But the director handles it very deftly by making Rab responsible for her not recognizing him. If someone can overlook this apparent flaw and suspend their belief then only will they be able to enjoy the movie.

The best scene of the movie is undoubtedly the one where Shahrukh is working on his laptop and Anushka walks in and the way he bumbles and struggles. The scenes with the tiffin are also very beautiful. The song Haule Haule is picturized very well and the song Phir Milenge Chalte Chalte is brilliantly choreographed. Shahrukh’s Dev Anand impersonation is absolutely spot on. It should win all the Best Choreography awards. Tujhme Rab Dikhta hai is also very beautifully picturized. The cimematography by Ravi K Chandran is beautiful and the colors very vividly portrayed.

Shahrukh as Surinder Sahni is brilliant with all his quirky mannerisms. He takes to the role like a fish to water. Its a shame that this role gets sidelined a bit later. He can sleep walk in the Raj character but he has acted very well in both the characters and avoided overacting. He looks a bit old during some of his close ups. He will definitely be getting a lot of Best Actor nominations and may even win some. Anushka is brilliant. She excels in a meaty role which has so many shades. She is also a great dancer and has a great screen presence. She will definitely win all the best debut awards this year and is a strong contender for the Best Actress award. Vinay Pathak is brilliant as the flashy Bobby Khosla.

The movie is entertaining for the most part. In the end it becomes a little heavy with the melodrama and starts feeling a bit lengthy with all the Rab references. Also the sumo wrestling bit looks too far fetched. Aditya Chopra’s direction is very good. Its his direction that makes an otherwise ordinary story into something that holds the viewer’s interest for close to three hours. Dont miss the end credits for they are one of the best end credits in a long time.