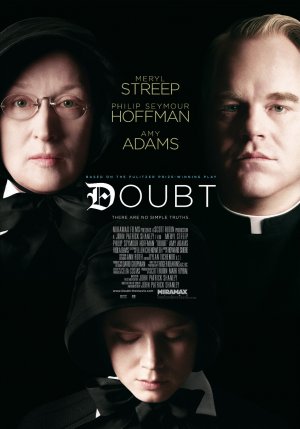 Doubt is the screen adaptation of the director’s own stage play ‘Doubt: A Parable’. A charismatic priest, Father Flynn (Philip Seymour Hoffman), is trying to reform the schools’ strict customs, which have been fiercely guarded by the disciplinarian Sister Aloysius (Meryl Streep). When Sister James (Amy Adams) raises a suspicion that Father Flynn may have acted improperly with Donald, the only black student, Sister Aloysius is convinced of his guilt. Armed with nothing but her moral certitude, she gets into a battle of wills with Father Flynn to expunge him from the school.

The best scene of the movie is definitely the one where Donald’s mother (Viola Davis) appeals to Sister Aloysius. The scene of Sister James’ outburst against Sister Aloysius, the confrontation scenes between Sister Aloysius and Father Flynn and the final scenes are all excellent. Father Flynn’s speeches in the parish about doubt and gossip are excellently written.

Meryl Streep is brilliant and she should have won the Academy Award for Best Actress. Kate Winslet deserved an Oscar nomination but her performance was not as good as Meryl’s. Philip Seymour Hoffman, Amy Adams and Viola Davis all give performances worthy of the Oscar nominations that they received. Special mention needs to be made of Viola Davis who leaves a great impact in just a 10 minute role.

Cinematography by Roger Deakins is good and Art Direction by Peter Rogness captures the 60s nicely. Music by Howard Shore is very good and adds to the movie’s feeling of doubt and paranoia. The movie has been adapted from a play and it is mostly set indoors except for a couple of scenes and this gives the movie a stage play feel. It’s pacing also drops at times but is rescued by the excellent performances. John Patrick Shanley’s direction is very good despite the flaws mentioned. He keeps the viewers engrossed all the while and deliberately leaves the ending ambiguous to let the viewers decide on Father Flynn’s innocence.