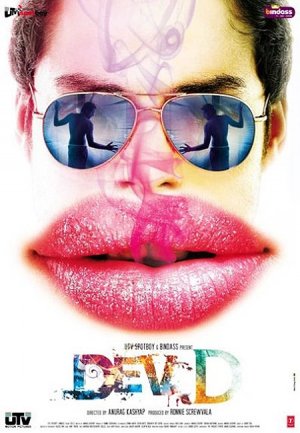 Dev.D is the modern adaptation of the classic Bengali novel Devdas by Sarat Chandra Chattopadhyay. It is the story of Dev who returns from London to meet his childhood sweetheart Paro but ditches her on hearing some rumors about her. He insults her and she gets married to a guy her parents choose. Dev starts taking drugs and alcohol and runs into Chanda, a prostitute who falls in love with him. Will Dev reciprocate her love or continue to fall into this abyss of destruction is what the rest of the movie is about.

Dev.D starts off brilliantly. The dialogues are excellent initially and shock the viewers. The movie goes downhill once Paro gets married. We are treated to repetitive scenes of Abhay Deol drinking and taking drugs. Agreed the movie is about a character who is into self-destruction but nothing happens after a while. The movie continues to meander until Anurag finally realizes its time for the movie to end and we are treated to a quick end. He goes for the happy ending but it comes off as totally out of the plot and as some sort of a compromise because Dev is never shown to be in love with her.

Anurag gets away with dialogues which have been difficult for even english movies in India. The music by Amit Trivedi is good and thankfully the lead actors never lip sync in the movie. Both the Emosanal Attyachar versions are good and Nayan Tarse and Aankh Micholi are good. The scenes of the three singers singing the song does’nt look good. Most of the movie is shot in dark and badly lit rooms.

Abhay Deol’s choice of movies is great and he is choosing different movies but his acting style is the same. He has no expressions on his face and his dialogue delivery is the same whether its Dev.D or Oye Lucky! Lucky Oye! or Manormana Six feet under. Mahi Gill is brilliant as the fiesty Paro and delivers an exceptional performance. The movie looks brilliant only when she is on screen. Kalki Koechlin is ok as Chanda. The infamous MMS scandal is incorporated into her story as a reason for becoming a prostitue. She is’nt that good looking and has an accent while speaking Hindi. The Chunni Lal character hardly registers an impact.

There is no doubt that Anurag Kashyap is a very talented director and his talent shows off in some scenes. He has directed the brilliant Black Friday and the totally self indulgent No Smoking. This is in between those two movies. The movie could have been a masterpiece but Anurag messes it up. He starts off the movie very well but then we have repetitive scenes of how Dev is getting Vodka or drugs which is not really relevant to the plot. Initially the scenes and dialogues shock and register an impact but after a while the dialogues keep getting vulgar and vulgar and the shock factor is lost. After a while what matters is whether the movie keeps you engrossed and entertained and this is where Anurag fails big time. Anurag self destructs the movie just like the character Dev self destructs his life.