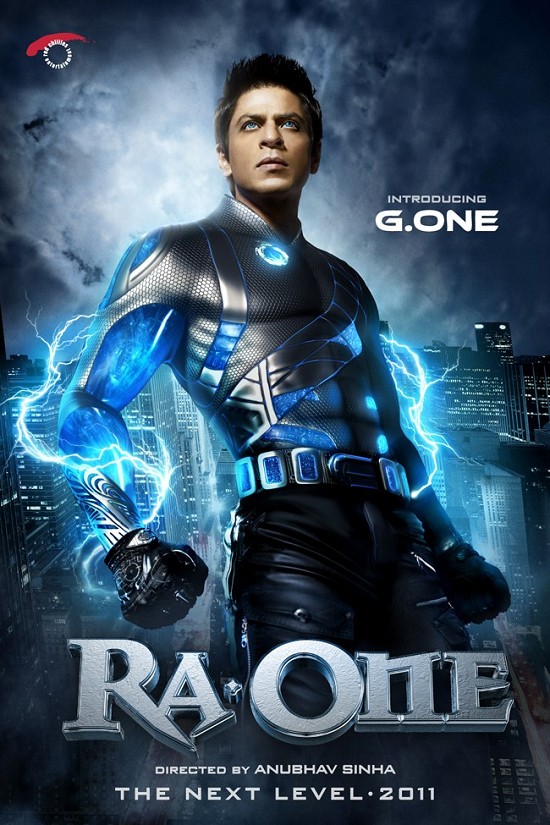 Shekhar (Shah Rukh Khan), a video game creator, is considered uncool by his kid Prateek (Master Armaan Verma). Prateek thinks that villains are more kick-ass as they follow no rules. In order to impress his kid he designs a video game where the villain is more powerful than the hero. But the villain Ra.One starts to learn things by himself and starts to control the game. When Prateek plays the game using his Id Lucifer beats Ra.One in the first level of the game Ra.One does not like it and wants to kill Lucifer. The rest of the movie is whether G.One who is not as powerful as Ra.One can save Prateek.

The plot in the second half of the movie and the villain Ra.One’s power to take any other person’s shape is heavily inspired from Terminator 2. One can probably source many scenes in the movie to different Hollywood movies but then Superhero movies have lot of common elements and scenes. Some of the scenes stand out like the one where Ra.One starts smiling on his own or the scene where Prateek plays against Ra.One or the scene where Ra.One comes out of the game or the scenes where Prateek is chased through the streets of London and where G.One makes his entry or the scene immediately after the song “Chamak Challo” or the final scenes.

The Sanjay Dutt – Priyanka Chopra cameo scene is set up as a dream of Prateek but is totally unnecessary in the movie. It also seems ridiculous with all the Bollywood references and the Kuch Kuch Hota Hai theme playing. It would have probably been more appropriate in a movie like Om Shanti Om. Also some scenes seem totally inappropriate in a movie which is primarily aimed for kids like the scene where the teacher’s home video starts playing or the gay airport screener scene. Not sure how the movie has been awarded a U certificate with those scenes. While the Rajni cameo may elicit whistles from the audiences it just does not make sense in the movie and is unnecessary. It also seems that they probably shot the scene with a body double and then superimposed Rajni’s face.

The train scene is a throwback to those scenes from 70s/80s masala movies where the hero has to do something impossible in order to save his loved ones. The scene starts off very well but is ruined by the song “Raftarein” playing in the background. The song is very good on its own but it just does not gel with the scene. Anubhav also tries to impart comedy in a scene which is supposed to be serious and life threatening for Sonia and the people traveling in the train. When G.One starts walking horizontally on that train it is pretty clear that they copied the scene from the movie Robot. There is a scene where the train station is blown up which is quite well done but seems unnecessary.

Not sure how good he is with his Tamil dialogues but Shah Rukh Khan is decent as Shekhar. While it may seem as a caricature of a Tamilian, his performance manages to convey that he is a good person. Shah Rukh Khan is excellent as G.One though his performance may seem similar to his performance from My Name is Khan. Kareena is very good as Sonia and she does look gorgeous. She is very good in the few minutes where she gets to be negative too. Prateek looks like a girl with his hairstyle but is excellent. The best thing about him is that he is not annoying as kids usually are in Hindi movies. Shahana is decent. She gets to mouth some science mambo-jumbo in the initial few scenes and gets sidelined thereafter. Tom Wu is excellent as Ra.One and they probably should have stuck with him as Ra.One for the whole movie. Arjun Ramphal looks physically menacing as Ra.One but Tom Wu is better acting wise in the negative role. Dalip Tahil is over the top and hams in a cameo. Satish Shah is there to provide some comedy which is not that funny.

Story by Anubhav Sinha is pretty good. Video game characters coming out of the game is pretty novel. It’s the screenplay by Kanika Dhillon, David Benullo, Musthaq Sheikh, Anubhav Sinha which is the problem. The movie establishes the characters initially and just when it goes into the next level it is brought down a bit in the second half by some unnecessary scenes. Dialogues by Kanika Dhillon and Niranjan Iyengar are pretty good.

Songs by Vishal-Shekhar are pretty good with “Chammak Challo” already the big hit. Choreography by Ganesh Hegde is pretty good for the song “Chammak Challo” with Shah Rukh imitating dance moves of Rajnikanth. “Dildaara” is pretty good though people who have already heard the original “Stand by Me” will not like it much. “Bhare Naina” the sad song is excellent and is brilliantly picturized. While the song “Criminal” has energy it could have done without the in your face booty shaking. Background music by Vishal-Shekhar is decent. The themes (which are on the music album) are excellent but the rest of the background music could have been way better.

Cinematography by Nicola Pecorini and Manikandan is excellent especially in the action scenes. Editing by Martin Walsh and Sanjay Sharma is ok. The movie could have been edited more tightly especially the second half which drags a bit. Art Direction by Sabu Cyril and Nick Dent is excellent especially for the final fight scene which looks like out of a video game.

The vfx by Jeffery Klieser (X-Men: The Last Stand) are not only the best seen in Indian cinema but are also the best use of them in Indian cinema. There is ambition and scale. These are almost as good as any Hollywood movie with probably one tenth of the budget of a Hollywood movie. Yes there are just a couple of places where the vfx seem tacky or unfinished but I think it can be excused in the larger context. Most people would not even notice these and one can point out similar stuff even in Hollywood movies if one scrutinizes it so much.

Anubhav’s direction is excellent especially when it comes to the action scenes whereas it’s just about decent when it comes to the regular scenes. He tries to marry the western superhero genre with Indian masala and succeeds to large extent. There is not much melodrama especially with Shekhar’s death. The climax and the final scenes overlap between real and a video game. Those who have played video games will probably like the final fight scenes more whereas the rest of the audience may be disappointed with those scenes.

The movie is primarily aimed at the kids and the final fight scenes make that pretty much clear. But the makers seem to have tried to appease all kinds of movie audience thereby diluting the impact of the movie. Now if one wants to appreciate the best vfx in Indian cinema and encourage the use of them then one should watch the movie. The movie is flawed no doubt with some unnecessary scenes and some inappropriate comedy and might get panned by the regular audiences now but will be hailed in the future for its groundbreaking use of vfx in Indian cinema. An extra star just for the vfx. The movie is not perfect but it has a heart.