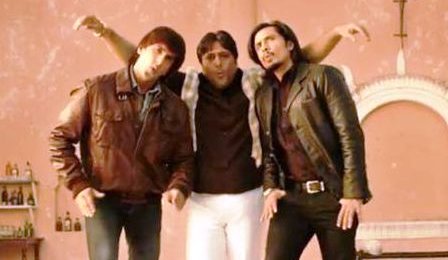 Kill Dil, directed by Shaad Ali, starts off promisingly despite its hackneyed plot. The film stars Ranveer Singh as Dev, and Ali Zafar as Tutu; they’re a pair of hardened shooters who work for Bhaiyaji, a grizzled don played by Govinda. These trigger-happy killers banter relentlessly, even while pumping bullets into a terrified target, and it’s their hilarious, irreverent, and often crude one-liners that are the best thing about this film.

Too bad Ali traps these men in a script straight out of the 70s. Dev meets Disha, a feisty young thing, played by Parineeti Chopra, and he’s instantly smitten. Soon enough, he wants to give up his life of crime and go straight. After a string of botched interviews, he even lands a job as an insurance salesman. But predictably, this change of heart tests his relationship with Tutu, and gets Bhaiyaji all hot and bothered.

At just over two hours, Kill Dil is no slog to get through. But it certainly begs the question – why make this film today? Like Gunday, also produced by Yash Raj Films, this is a throwback to those masala potboilers of the past. I can’t speak for you, but I’m tired of these tributes. In the scene in which Dev interviews for the insurance salesman job, the camera lingers on a framed photograph of Nirupa Roy bearing the word ‘Founder’, even as Alok Nath, playing presumably the HR head, questions Dev about his qualifications. Lame joke!

There is mawkish sentimentality too, in a scene where Dev invites a poor kid to join Disha and him at their table in a modest dhaaba, and the kid invites another poor girl to join them. The scene is meant to show us that Dev is really a softie under that tough exterior, but what it does, is make you cringe.

The more enjoyable portions in Kill Dil are the humorous ones, most to be found in the first half. A scene in which Dev and Tutu head to the library to figure out what Disha meant when she replied to Dev’s SMS joke with an ‘LOL’ is pure genius. As is a scene in which the two hired hands negotiate the price of a set of bangles they want to purchase from a jeweler whom they’ve got gagged and bound on Bhaiyaji’s orders.

The film goes immediately downhill post intermission, hurtling towards a rushed, contrived and only-too-convenient climax. The narrative is punctured by way too many songs, and fine actors are wasted in thankless roles. Ali Zafar, charming as always, is horribly miscast, and appears a tad embarrassed stuck in this messy film. The abundantly talented Parineeti Chopra does her best to infuse some credibility into her role, but that’s difficult when you’re cast as a hard-drinking, perenially-partying rich girl who rehabilitates criminals for a career. Honest!

It’s a joy to watch Govinda on the screen after all these years, and the actor does well as the wisecracking crime-lord who nicely matches steps with the boys when they break into a dance. He has a killer maniacal laugh too, but you can’t help thinking he deserved a more meaty role. It’s Ranveer Singh though, who owns the film with his livewire performance as the boyish thug. Always ready with a quip, going through life without any filters, he gives us an endearing anti-hero in Dev, who stands out despite the film’s many flaws.

There’s not a lot of praise one can heap on Kill Dil except to say that it’s not an unwatchable film. The first hour goes by briskly, and you’ll even find yourself smiling along. If that’s enough for you, give it a shot. I’m going with two stars for the film, and additional half star for Ranveer Singh’s terrific performance, which makes it two-and-a-half out of five for Kill Dil.