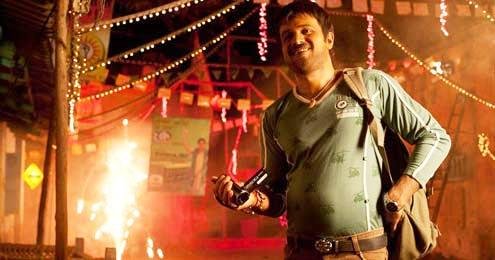 Dibakar Banerjee’s Shanghai is a crisp, take-no-prisoners drama about seeking justice in the complex landscape of the Indian democracy. The film benefits from the compelling performances of its cast and the director’s sharp eye for detail while narrating a simplistic, and at times predictable story that traces the inevitable nexus between Indian politics and crime.

In the fictional small town of Bharat Nagar that’s poised to become the next Shanghai, a respected left wing activist, Dr Ahmedi (Prosenjit Chatterjee), is mowed down by a pick-up truck after addressing a rally against a major redevelopment project that will render hundreds of poor families homeless.

When Ahmedi’s student Shalini (Kalki Koechlin) and his wife Aruna (Tilottama Shome) demand a probe into this hit-and-run that the police is quick to dismiss as a drunk-driving accident, the chief minister (Supriya Pathak) orders an enquiry commission to get to the bottom of the truth. Even as IAS officer Krishnan (Abhay Deol), who’s assigned to lead the enquiry, takes his job more seriously than his superiors had intended for him to, local videographer Jogi Parmar (Emraan Hashmi) stumbles onto some valuable evidence that could directly implicate the political bigwigs.

Based on the novel Z by Greek author Vassillis Vasilikov (its 1969 film adaptation by Costa-Gavras won two Academy Awards), Shanghai is rich in irony from the moment in, as it sets about exposing the reality behind the ‘India Shining’ dream. With nicely etched characters, a realistic shooting style, and a dollop of humor, Banerjee sucks you into his narrative, seldom letting the pace slip in the film’s less-than-two-hours running time.

As always, it’s the little moments that stand out in his films…a tense meeting of the enquiry commission is disturbed when a football, followed by a young child chasing after it, enters through the window. Moments later, following a heated exchange, the two principals slip on a wet-floor outside the meeting room. Earlier in the film, at the height of an uncomfortable confrontation in a hospital, a no-nonsense nurse casually strolls in, reprimands the offenders for hollering in the premises, then walks out just as unexpectedly as she entered. Even in the most intense situations, Banerjee gives us something to smile about.

There are disturbingly real moments too that feel uncomfortably familiar… a policeman’s apathy towards a wife confronting her husband’s corpse, or a criminal’s confidence at escaping the hand of the law because of his ‘connection’ with a powerful politico. If something’s missing in this film, it’s a sense of suspense, the pressure-cooker urgency that this kind of ‘thriller’ needed.

Good thing then that the actors hit all the right notes. In smaller parts, Supriya Pathak as the all-powerful madam-CM, and Farooque Shaikh as the seasoned, ever-practical bureaucrat are a joy to watch. Prosenjit Chatterjee as the uncompromising rabble-rouser is nicely cast, while Kalki Koechlin plays it grim from start to finish, teetering dangerously close to one-note.

But Shanghai belongs to its male leads: Abhay Deol, despite his wobbly Tamil accent, is terrific as a man temporarily conflicted between doing the right thing, and doing what’s right for him. His chameleon-like volte face from a polite, bullied man to a fellow fully composed and confident is one of the film’s best scenes. As for Emraan Hashmi, he steals the film as the gauche, stain-toothed pornographer with a selfless heart. It’s easily the film’s most winning performance, and Hashmi doesn’t once miss his mark.

The grand revelation in the end is a tad underwhelming, and the big evidence far too conveniently acquired. Yet, Shanghai is consistently watchable despite these lapses. I’m going with three out of five for Dibakar Banerjee’s Shanghai. It’s a good film from one of Hindi cinema’s most exciting filmmakers…it’s just not great.