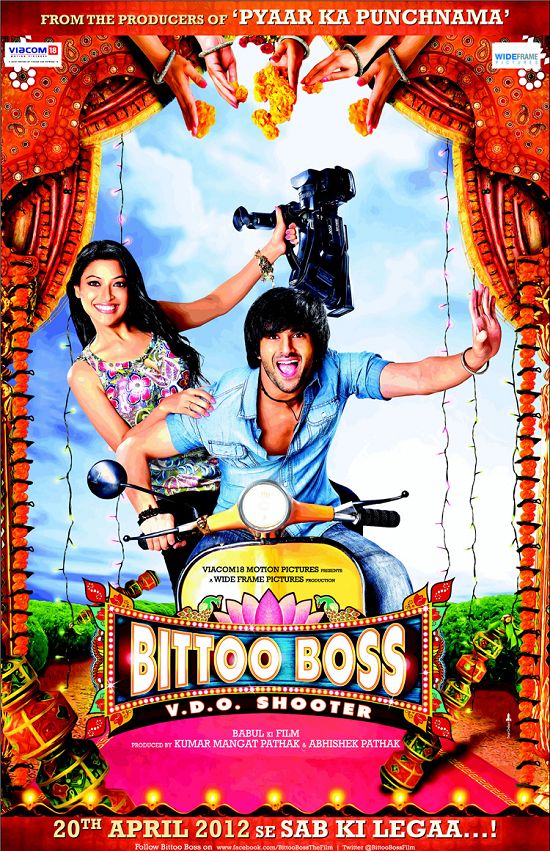 We love to celebrate weddings. In real life. In reel life. It’s that time when the family and friends get together. The fun, enjoyment and celebrations continue for several days. A wedding is an all-important occasion in our lives. No wonder, weddings play an integral role in our movies – either it’s a vital sequence or the milieu.

After regaling us with the very likeable PYAAR KA PUNCHNAMA, which gave an insight into urban relationships, the makers’ new outing, BITTOO BOSS, narrates the love story of a videographer. There’s no denying that the look and feel of BITTOO BOSS reminds us of Yash Raj’s pleasant outing BAND BAAJA BAARAAT towards the first half only. The backdrop is similar [weddings], so is the setting [North India]. The similarities don’t end there. The lead man in BITTOO BOSS [Pulkit Samrat] may pass off as a far-flung relative of Bittoo, the character Ranveer Singh portrayed in BAND BAAJA BAARAAT. But when viewed in entirety, BITTOO BOSS is not a replica of BAND BAAJA BAARAAT or TANU WEDS MANU, as a section of the media would like us to believe.

BITTOO BOSS has a fascinating premise, it appears bona fide as well, but not all concepts expand into entrancing fares. One anticipates a skillfully textured rom-com with flesh-and-blood characters, but what one gets to watch are caricatures. The slipup lies in its incoherent and erratic screenplay: the conflict doesn’t work, the love story lacks fizz and the drama lacks the power to influence you.

Bittoo Boss [Pulkit Samrat] is a young, charming, ingenious wedding cameraman who takes pride in calling himself a ‘Sesky Video Shooter’. He is the star of all wedding celebrations of a town in Punjab. Bittoo believes in spreading cheerfulness through the beautiful moments he captures, moments which you can rewind and keep watching for years and smile looking at them, thus making them heartfelt experiences which last forever.

Bittoo falls in love with an educated and strong-headed girl [Amita Pathak], who makes him realize the significance of financial stability and fiscal gains in order to achieve admiration and acknowledgment. The smart and righteous cameraman is lured to take a shortcut in order to earn a quick buck and get his life back on track.

BITTOO BOSS is a clear case of unfulfilled promises. In the recent past, most debutant directors have had the courage to charter an innovative pathway. One expects the story and the execution of the written material to leave an indelible impression, but director Supavitra Babul doesn’t get it right. Sure, the plot has potential, but the writing is lopsided and tedious and what makes it worse is the indolent tempo at which the plot unfurls. There’s a flicker of optimism when the narrative shifts to Shimla, after an acidic altercation between the lead pair. One expects the story to hurl surprises, but the episodes are so juvenile and monotonous that it tests your endurance after a point. The few charming moments are the ones between Pulkit Samrat and his assistant in Shimla, but, sadly, the film meanders in its concluding stages yet again. Supavitra Babul grounds his characters in realism, but he’s handicapped by a listless screenplay.

The soundtrack [Raghav Sachar] is mediocre. The most striking attribute of the enterprise is its cinematography, with the DoP doing a superior job.

After enjoying prominence on TV, Pulkit Samrat makes his big screen debut with BITTOO BOSS. He acts competently and gets ample scenes to prove his prowess. In fact, he injects a huge dollop of zing in the enterprise. Amita Pathak is decent, but is relegated to the backseat in the post-interval portions. The actor who enacts the part of the cabbie turned Pulkit’s manager in the second hour is really amusing. Mohan Kapur is okay, while Rajinder Sethi doesn’t get much to do.

On the whole, BITTOO BOSS is a good opportunity lost.