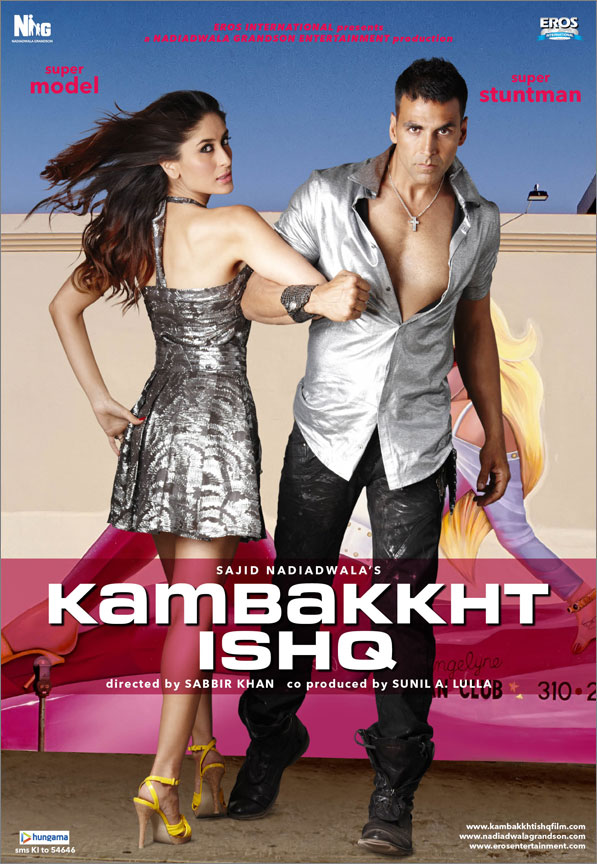 Kambakkht Ishq is a remake (may be copied – the story hasn’t been credited though) of the Tamil movie ‘Pammal K. Sambandam’ and the screenplay is credited to four writers but it’s basically the same screenplay as the Tamil one except that it’s obscene, crude and vulgar. The setting is changed to Hollywood which itself is ludicrous. Now Why would an Indian stuntman be a body double to caucasian Hollywood actors. He is shown riding horses (Man those Hollywood actors can’t even ride horses) and in the very first scene itself, Akshay plays body double to Brandon Routh but is shorter than him. Setting the movie in Hollywood and having actors in bit roles is all a gimmick. The movie could have been set in Bollywood itself.

The stuntman lives like some big movie star in mansions and is a player and all American girls including actress Dennis Richards (playing herself) fall for him. The Tamil original also had a weak story and screenplay but it was at least funny in some scenes and some of the dialogues were really funny. The performances by Kamal, Simran and Sneha were very good. Kamal was a stuntman who is a Brahmachari and Simran was just a surgeon unlike Kareena who moonlights as a model to pay for her college and Sneha and Abbas had better roles.

The movie could have been very funny had it been adapted well but the writers seem to have removed the few funny dialogues from the original. The dumb blonde scene in the beginning is the only funny scene. Javed Jaffery’s scenes could have been funny but they are not due to some bad acting. Boman Irani’s scene is just ridiculous.

Akshay Kumar reprises the same role that he’s been doing in most of his movies. He is good in just a couple of scenes but horrible in most of the movie. Kareena looks gorgeous and dresses in the skimpiest costumes but is annoying with her overacting. Aftab, the non-actor is there as just as a sidekick and Amrita is there just to expose. Kiron Kher hams as always in her standard Punjabi role and she needs to be banned from movies but then that applies to most of the cast in this movie. Brandon Routh, Dennis Richards all are in bit roles which are insulting to them (in real life) and Slyvester Stallone who just happens to walk around bad neighborhoods does a Sunny Deol in the climax.

The cinematography is good and the movie has beautiful locales. The songs are horrible except for Om Mangalam and Bebo which are catchy. Bebo for some reason has been picturized like the Kareena song ‘Yeh Mera Dil’ from Don (if its a spoof its not funny) and Om Mangalam is badly choreographed and picturized.

The background music is just horrible. The dialogues are crude, vulgar and not funny and includes the a-hole word a few times. Even the odd funny lines are marred by horrible dialogue delivery and ridiculous situations. I guess the Indian Censor board was sleeping because the movie has got a U/A Certificate or may be they think that all these curses and sex talk is quite alright for 12 year olds.

Sabbir Khan’s direction is horrible and the movie is sexist, racist and offensive. There is a scene where Akshay farts in Amrita’s face and women flashing in a song and Kareena being forcibly kissed to shut her up. There is a scene where a black woman violates Akshay at the airport and he dresses up in blackface. Viraj sleeps with so many firangi women (hey they are all easy) but doesn’t with Simrita, so he is a very good guy. Simrita cries thinking that she slept with Viraj but is relieved to find out that she is still sati savitri. The climax and the end is just horrible.