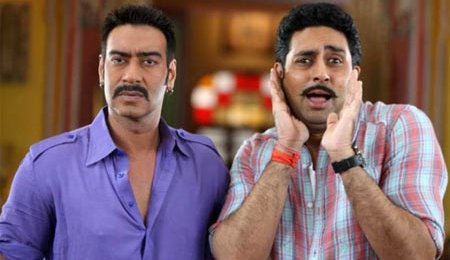 Bol Bachchan, directed by Rohit Shetty, revels gleefully in its silliness. This is a film whose pedestrian humor requires neither taste nor common sense to appreciate, and anyone seeking wit, a clever screenplay, or inspired performances might want to revisit Hrishikesh Mukherjee’s Gol Maal, which Shetty plunders in the name of inspiration for this lazy film.

After losing their ancestral home to greedy relatives, Abbas Ali (Abhishek Bachchan) and his sister Sania (Asin) move to Ranakpur village on the insistence of their uncle (Asrani), in the hope of finding employment. The head of this village is the able-bodied-but-dim-witted Prithviraj Raghuvanshi (Ajay Devgan), a pehalwan who massacres the English language each time he opens his mouth, and who repeatedly claims to have an allergy to liars. Only fitting then that Abbas must find a job at Prithviraj’s haveli, but after adopting the fake name of Abhishek Bachchan, no less, for a reason too harebrained to get into here.

To cover up that one lie, Abbas inevitably ends up concocting more… He persuades a local mujra dancer (Archana Puran Singh) to pretend to be his mum, and he even invents a gay twin brother – sans moustache – who as it turns out, is promptly hired by Prithviraj as a kathak teacher for his sister Radhika (Prachi Desai).

Aside from such Rohit Shetty staples as exploding cars, and gravity-defying hand-to-hand fight scenes, Bol Bachchan is a different beast from the director’s previous films. Even if, like me, you weren’t a big fan of his Golmaal movies, you’d have to agree Shetty knew just how far to stretch a joke. In Bol Bachchan however, the running gag on Devgan’s clunky English gets tiresome after a point. And there’s little evidence of Shetty’s pacing skills either. Bol Bachchan plods on for 2 hours and 30 minutes, and huge portions of the film are yawn-inducing.

But it’s not entirely a write-off either. Archana Puran Singh gets some nice scenes to show off her comic chops, the writers throw in memorable punchlines from popular Amitabh Bachchan-starrers in all the right places, and Abhishek Bachchan loses much of his stiffness while playing a part (or two) that he seems to be actually enjoying. His limp-wristed, lip-biting portrayal of the effeminate twin is a complete cliché, but because of the actor’s stocky build, his body language alone is such a hoot! The women in this film have precious little to do, but Ajay Devgan sportingly plays along as the knucklehead leader of the village.

Bol Bachchan offers a few genuine laughs, but it’s too long and too labored to describe as a pleasing film. Shetty, who came up with some clever comic sketches particularly in his first and third Golmaal films, appears to be cashing in on past glory with this dull rehash of his successful work.

I’m going with two out of five for Bol Bachchan. Even if you’re a fan of Rohit Shetty’s cinema, it’s unlikely your chest will become a blouse over this one!