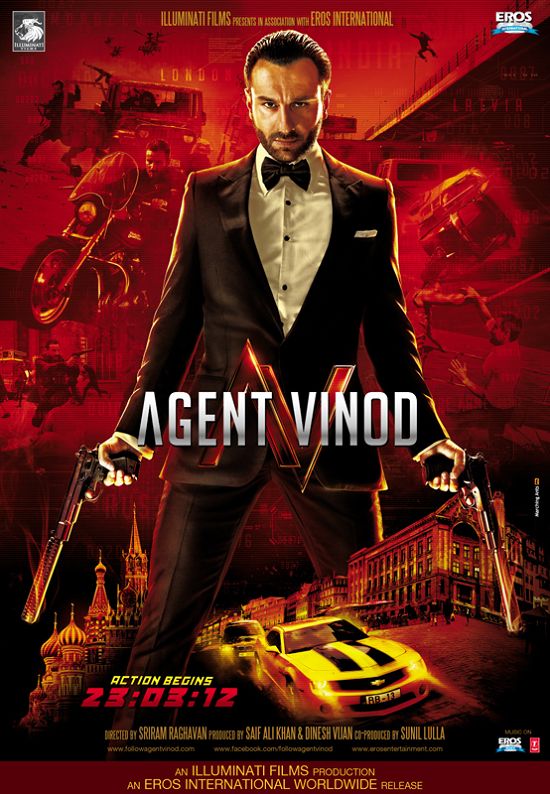 AGENT VINOD is a film that is dragged to an undeserving 155 minutes which has a 15 minutes introduction scene of Saif in the beginning. The film could have been easily brought to 20-25 minutes shorter as the story doesn’t have much in it. It’s a film that has been made on such a huge canvas that it pulls the bar of expectations but what we get on screen is far behind of the hype that the film has. Director does the film over the top because in each of his sequence, one can notice that the film is trying to be clever, but its actually not!

The writers are to be blamed for the half-baked role written for Kareena Kapoor. Her character more so becomes a caricature, thanks to filmy dialogues and poor direction. Also the screenplay writers fail to maintain rhythm of the film because every scene is followed by some random action and chase scene.

Why the first half of the film partially works is because you know almost nothing about where the story will head and the curiosity is still there to know, what will be there in its kitty! But as the film proceeds further, the pace slackens because what we get in the name of story is same old rehashed version of spy film. There are some delicious moments in first half like the one where Kareena’s character is introduced to interrogate Saif with heavy doses. Also the one when Saif Ali Khan cons Prem Chopra to clone his cell. It’s a humorous as well as a thrilling scene. But sadly, there are very few such scenes in this long flick.

The film does pick some pace post intermission but again it drops down soon because there are so many characters introduced in this half that you don’t exactly figure out that why these characters are needed! The Gulshan Grover episode with the mujra dance is the best part of the film because it thrills and the appearance of Gulshan Grover lightens up the screen. But the film is so dragged that you beg for a spare. The moment you feel that the film is about to end, you are served with yet another story.

Pritam’s music is very good. All four songs leave strong impact and all are energetically choreographed. Special mention to the choreographer for “Dil Mera Muft Ka” which is shot in lavish venue and is bound with some bold dance steps. The cinematographer doesn’t give any such views which will please the eyes. Sriram Raghavan fails to execute the film because his aesthetics and nuances about this film clearly lacks. It’s a lazy attempt and hence it should have been handled well by the director.

Saif Ali Khan is fantastic as he delivers everything to the perfection. For him alone, Agent Vinod becomes a watchable fare. He infuses life in the film. Kareena Kapoor is saddled by badly sketched role for her. Among all others, Prem Chopra is damn impressive.

AGENT VINOD is disappointing and boring often. The film lacks a decent plot and also the director fails to create any interest among the viewers. There are few countable good scenes and a terrific performance by Saif Ali Khan in this otherwise mediocre action flick.