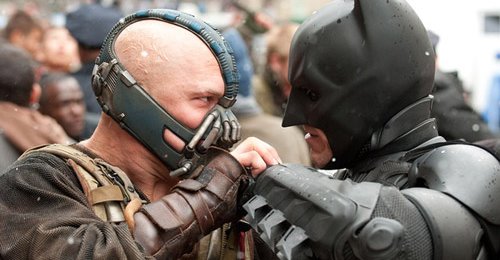 In order to fully appreciate The Dark Knight Rises, it might be a good idea to refresh your memory of Batman Begins, given that key plot points and characters from the 2005 film are referenced in Christopher Nolan’s final chapter in the Batman trilogy. Oh, and one more thing – it would also help if you had no memory of The Dark Knight, Nolan’s 2008 sequel.

Why, you ask? Well, I’m just going to say it – because while The Dark Knight Rises is a perfectly good film, it’s not The Dark Knight, which remains the best superhero film made yet.

Much of the reason why the new film feels underwhelming compared to the last one, involves new villain Bane (Tom Hardy), who is no match to The Dark Knight’s Joker, as played by Heath Ledger. An intimidating hulk of a man whose nose and mouth are covered by a mysterious Hannibal Lecter-like mask that makes his words mostly inaudible, Bane is a formidable physical presence, but an entirely different beast from the creepily menacing Joker.

Comparisons aside, The Dark Knight Rises is a solid hunk of storytelling, and a fitting end to a very ambitious series. The film opens eight years after The Dark Knight ends, with Batman having disappeared from the Gotham skyline after taking the rap for the murder of Harvey Dent and vanquishing the Joker (although no mention is made of the iconic bad guy in this movie, perhaps as a mark of respect to the late Ledger’s memory?), leaving his alter-ego Bruce Wayne (Christian Bale) living like a recluse in his sprawling family home. Sullen and unfriendly, and limping around with a stick, sporting months-old face-fuzz, Wayne moans to his trusted butler Alfred (Michael Caine) that the world doesn’t need Batman anymore.

No sooner than he utters those words, Gotham is plunged into anarchy by Bane and his army who storm a prison releasing hundreds of criminals, then going on to stage a visceral attack on the Stock Exchange. It’s a good thing Lucius Fox (Morgan Freeman) still has some of those trendy Batsuits around for our hero to slip into and take charge.

Unfolding leisurely over 2 hours and 44 minutes, The Dark Knight Rises flirts with some interesting ideas like Bane ‘liberating’ the prisoners so they can snatch wealth from the hands of the affluent, and his setting up of a people’s court to dispense instant punishment to the rich and the privileged. These themes of economic collapse and urban terrorism are thought-provoking and relevant, particularly in today’s times. But they’re never explored in much detail. In contrast, The Dark Knight superbly addressed the fine line between good and evil, and the difficult choices we must sometimes make.

The new film’s mostly somber tone leaves little room for humor, but what’s surprising is how deathly dull some portions are. It’s likely you’ll find your patience waning during the scenes in which an injured Bruce Wayne is imprisoned in an underground well-like holding where he has long, profound conversations with fellow inmates. Equally unconvincing is the romance that develops between Wayne and Miranda Tate (Marion Cotillard), a wealthy heiress who joins the Board of Wayne Enterprises, offering to rescue the company during a rough patch.

Considerably more engaging is Bruce Wayne’s interaction with slippery thief Selena Kyle (Anne Hathaway), who he first encounters while she’s rummaging through his drawers. Selena, who is referred to as Catwoman in the comic books, is easily the most interesting character in The Dark Knight Rises, not least because Hathaway plays her as a snarky but alluring vixen with mysterious motives.

In Wayne’s corner, meanwhile, aside from old faithfuls Alfred, Lucius Fox, and Commissioner Gordon (Gary Oldman), is young, up-and-coming police officer John Blake (Joseph Gordon-Levitt) who seems to understand early on what is at stake here.

Starting with a thrilling James Bond-ish set-piece in which a shackled Bane is rescued from an airplane by a team of mercenaries, Nolan delivers some jaw-dropping action sequences that literally blow your mind. These include Bane’s carefully planned destruction of a football field, and at least one stunning chase scene involving Bruce Wayne’s newest toy, an armored flying vehicle dubbed The Bat. The last half hour in particular is an extended crash-bang-boom sequence in which much of Manhattan is blown to bits.

Although the film’s multiple storylines do get tangled up at times, and despite some messy plot holes, it’s unfair not to credit Nolan with once again giving us a blockbuster with smarts. The Dark Knight Rises is a satisfying, accomplished film packed with little twists and surprising cameos. It doesn’t deliver the emotional wallop of The Dark Knight (in spite of Hans Zimmer’s swelling, self-important score), but it’s a respectable finale to a much-loved trilogy.

I’m going with three-and-a-half out of five for The Dark Knight Rises. It’s a spectacle of high standards; just don’t set your expectations sky high, and you won’t be disappointed.