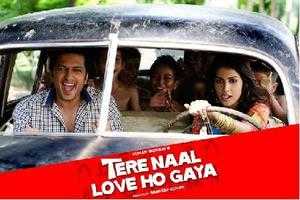 Off late most romantic comedies start with the accidental encounter of a spirited girl and a reticent guy, who subsequently set off on an unexpected journey. Same is the case here though their first encounter leads to an impromptu abduction! Also most love stories end with the bride running away on her wedding day to her real Prince charming. Over here the bride remains in place though they opt for a husband interchange in the marriage mandap. The alterations might be minor but, in totality, it helps this regular rom-com gain an identity of its own.

The best alternative that the film chooses, however, is having Genelia D’Souza play the free-spirited girl over the over-exploited Kareenas and Katrinas that the genre has often seen. Genelia not only brings freshness to the genre but her camaraderie with Riteish Deshmukh is at full throttle as compared to all their earlier outings.

To escape an undesired wedlock, Mini (Genelia D’Souza) gets herself kidnapped by the hands of a rickshaw driver Viren (Riteish Deshmukh). The unassuming Viren turns victim of the situation and has no option but to carry forward with Mini’s plans. Until the duo actually gets kidnapped by some gangster.

The writing by Dhieyo Sandhu might not be path-breaking stuff but doesn’t fall in the predictable territory either. The first half works towards building the rapport between the lead pair through their escapades. While the narrative, more or less, keeps you hooked, the graph dips intermittently and one wishes the escapades should have been more eventful. There isn’t any physical intimacy between the couple though their contrasting characters contribute to their credible chemistry.

The second half lands in more familiar territory amidst a North Indian sarso-ke-khet backdrop. You are randomly introduced to Viren’s extended joint family and their specialized family business – kidnapping. There are lessons on optimization in the abduction trade and endorsement of Indian tourism with lectures on how to treat foreign travelers with respect. Evidently they contribute nothing to the plot but are amusing nonetheless. Further you are assured that this family setting is the ideal place where ‘Pyaar To Hona Hi Tha‘ between the lead pair.

Fortunately director Mandeep Kumar has control over things and doesn’t let the film go out of hands. Neither does he let Genelia’s animated act go overboard, nor does he overuse the cultural backdrop. Unlike most films in similar vein (Jab We Met, Love Aaj Kal, Ajab Prem Ki Ghajab Kahani), there is no third angle in the love story and thankfully so. The film employs the abduction trade on a lighthearted backdrop resulting to some good humour. However a minor bone of contention is that it subsequently uses the same aspect to set a moral tone in the climax.

The film primarily works thanks to the convincing chemistry and performances by the lead pair. Riteish Deshmukh is resourcefully restrained, perfectly poised and, needless to say, his comic timing is impeccable. At the same time he allows Genelia to take lead as the film largely revolves around her character. And Genelia does complete justice to her meaty role with a refreshing and dynamic act. Her cute looks and electrifying smile add to her appeal. From the character cast, Om Puri gets the best lines and induces frequent laughter. Chitrashi Rawat and Navin Prabhakar are wasted. Veena Malik’s item number was avoidable.

With the feel-good factor working to its advantage, you might just end up saying Tere Naal Love Ho Gaya to this sweet-n-simple film.