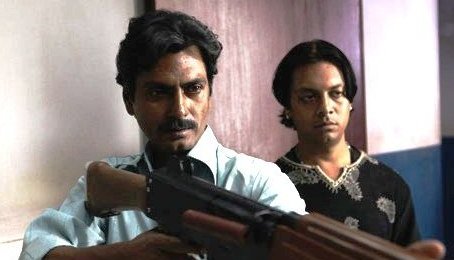 Showered with bullets in an elaborately staged coup at a highway gas station, Sardar Khan (a mercurial Manoj Bajpai) succumbs to his wounds. At his funeral, grief-stricken wails are comically drowned out by a singer belting out Yaad teri aayegi on a microphone, his fingers maintaining tempo to the beats. Almost immediately, Gangs of Wasseypur II transports us back to that whimsically violent world that Anurag Kashyap first introduced us to roughly seven weeks ago.

This is a universe where men model themselves after film heroes, cradling vendetta in their hearts while cold-bloodedly carving out a crime empire. In the midst of a deluge of bullets and bloodied bodies, Kashyap and his gang of writers continue that curious pastiche of violence, humor, and zabardast music in a saga spanning generations of rivalry.

And yet, it’s hard to deny that Wasseypur II is lacking. In plot for one… Despite the cinematic flair, this film weighs down on you, seeming like an endless series of killings without a narrative to string it all together. Where is the method to this madness? Unlike the earlier film that took its time (too much time, to be fair) to set up the chapters, this sequel hits the ground running with relentless gun battles and daylight murders. Yet it feels curiously empty, as if the characters are just moving around in impressive set pieces.

There’s a nicely done sequence in which a gangster fumbles to tie the naada on his pyjama even as he’s switching clumsily between two mobile phones, an impatient assassin on one line; on the other, a henchman assigned to trail a target in a vegetable market. It’s a cleverly written scene that delivers laughs, but it plays out too long for its own good.

Chase sequences are the mainstay in Wasseypur II, but here too, they outstay their welcome. It feels as if Kashyap, so enamored by that brilliant, breathless foot-chase scene in his earlier film Black Friday, is determined to outdo himself here with at least four chases that start out interestingly but seem to go on forever.

Where Kashyap scores is with the characters that he brings in, most of whom have an obsession with Hindi movies and their heroes. As the feud between Ramadhir Singh (Tigmanshu Dhulia) and Sardar’s hash-smoking heir Faisal (Nawazuddin Siddiqui) deepens, we are introduced to Faisal’s younger brother Perpendicular, a devil-may-care ruffian who wields a razor blade in his mouth, flicking it around with his tongue like he would a kamikaze sword. If Faisal is the Amitabh Bachchan worshipper, then his half-brother Definite prays at the altar of Salman Khan. Faisal keeps his emotions cloaked, his vulnerabilities bared only to his movie-mad wife Mohsina, who sings quirky ditties to lift his spirits. Faisal is the Wasseypur version of the reluctant Michael Corleone – sucked into the mafia, despite his intentions. In contrast, Definite wears his feelings recklessly on his sleeve, and together they work at avenging the barbaric murders of the family.

As with the earlier film, this sequel too is richer from the shining performances of its terrific ensemble – be it Richa Chadha as the steely matriarch, Aditya Kumar as the lisping Perpendicular, or Huma Qureishi as the feisty Mohsina. Co-writer Zeishan Quadri offers an outstanding turn as the hilarious yet feral Definite, while Nawazuddin Siddiqui, as the fearless Faisal, is the film’s standout artiste, a ticking time bomb of violence and emotion.

If Wasseypur II has one fatal flaw, it’s the indulgence of its director, so in love with his baby that he doesn’t stop introducing pointless subplots and characters until the very end. Where the earlier film benefitted from the delicious machinations of its players and an overall sense of intrigue, the sequel never goes beyond a typical vendetta story.

I’m going with a generous three out of five for Anurag Kashyap’s Gangs of Wasseypur II. Overlong and tiring, this film is saved by memorable characters and the fine actors who bring them to life.