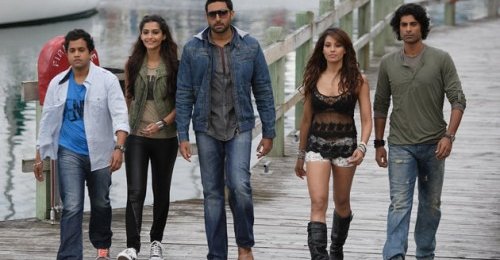 There’s an uncomfortable truth about Abbas-Mustan’s latest film Players that few critics will admit to – it’s not all bad! This fast-paced khichdi of two previous Italian Job movies and the director duo’s own last film Race has so much going on all at once that you’re left with little time to dwell on the gaping plot holes, the laughable dialogue, and the wooden performances.

The story’s centered on a team of thieves, led by Abhishek Bachchan’s character Charlie, who successfully steal a gold consignment traveling from Russia to Romania, but are double-crossed by one of their own who makes off with the loot. As hard as it is to take seriously, the team is assembled by a retired master criminal (Vinod Khanna) who helps Charlie in this mission because – here it comes – he wants to build the country’s largest orphanage with his share of the booty.

Abbas-Mustan, who’ve successfully delivered some engaging thrillers over the years, know a thing or two about pace.Players is packed with relentless car chases and plot twists, and the directors throw in their usual stock of skimpily dressed babes and seductive item songs. What they grapple with, unfortunately, are the little details.’

‘Sonam Kapoor’s character, we’re told, has done a thesis in ‘ethical hacking’, so she traces the world’s most notorious computer hacker with only a few clicks of the mouse. Bobby Deol is a celebrated illusionist wearing a permanent scowl because he maimed his little daughter while performing a magic trick. In one of my favorite scenes in the film, a seasoned criminal looks at photographs of a scene of crime, and deduces that a woman is behind the robbery because a flower vase that stood carelessly in a corner of the room before the crime, appears to have been placed more aesthetically in a post-theft photograph. To be fair, there’s lots of unintentional humor in the film, but that contributes to the appeal of Players.

Unlike Don 2 recently, which openly aped action scenes and the very look and feel of polished Hollywood blockbusters,Players is a distinctly Bollywood-ised remake that celebrates its corny humor, and even throws a love-triangle into a heist plot. Johnny Lever shows up as an Indian in New Zealand whose gori wife speaks only in Hindi and invites guests to attend a Satyanarayan ki pooja at their home. It’s cheesy beyond belief, but you’ll laugh.

What fails the film after all, is the over-enthusiasm of its makers, who overstay your hospitality by dragging the film on for an unforgivable 2 hours and 45 minutes. Also, harsh as this may sound, the film suffers considerably on account of its dull cast.

A stylish action thriller that involves as much posturing as Players, requires compelling actors who arrest your attention when they’re on screen. Abhishek Bachchan is earnest, and thankfully dials down his trademark smugness to play the ringleader of the team. Bobby Deol and Sikander Kher have no screen presence, but Neil Nitin Mukesh gets some interesting scenes to sink his teeth into. Bipasha Basu fills out a bikini nicely, but poor Sonam Kapoor changes her costumes and her hairstyle more frequently than her expressions. Together this team has the appeal of a pack of drained batteries.

I’m going with two-and-a-half out of five for Abbas-Mustan’s Players. What could have been a satisfying entertainer doesn’t quite achieve its potential.’