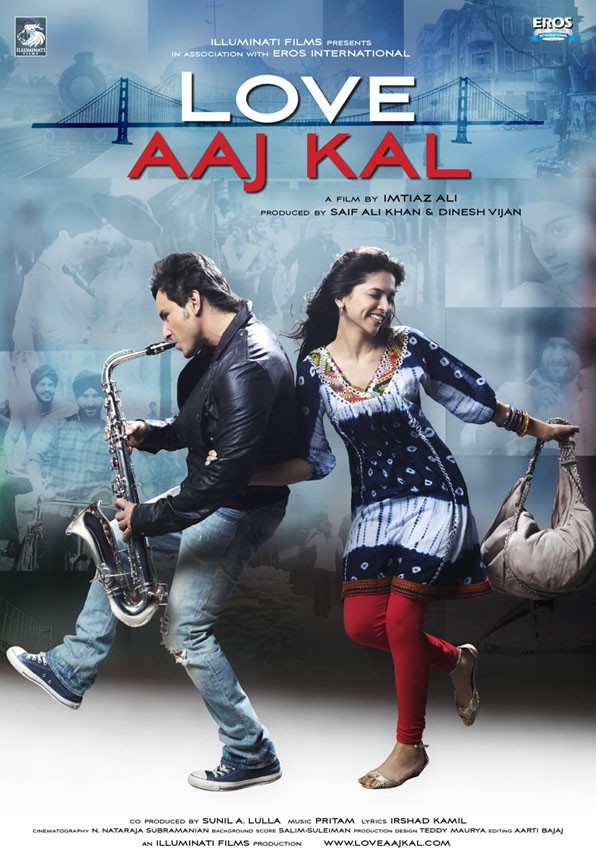 Jai (Saif Ali Khan), who wants to work on the Golden Gate bridge in San Francisco and Meera (Deepika Padukone), who wants to restore ancient Indian buildings break up because of their career choices. They hook up with others but are in constant touch and seem to long for each other. Veer (Rishi Kapoor) tells Jai about how he fell in love with Harleen and how it was so different back then, bringing out the contrast in how love and relationships have changed over the years. The Veer-Harleen track is inspired from the ‘A Time for Love’ track from the Taiwanese movie ‘3 Times’ but is definitely not a copy.

Some scenes stand out like the one where they tell each other the things that they hated when they were a couple or the sendoff scene at the airport or the one where they enjoy Delhi ditching their respective partners. The scene where they SMS each other at the dinner table and the scene where Jai meets Meera at her marriage are excellent. The Veer-Harleen track is beautifully done with Veer following her on a bicycle, the train scene where she leaves and her giving him chai hidden under her dupatta.

The first twenty minutes till they break up are just horrible with cheesy dialogues. Imtiaz seems to be in a hurry to wrap that part and the whole Saif flirting, the breakup scene at the cafe and the breakup party are just cringe worthy. The mugging scene seems totally idiotic with the bad guys trying to take Meera’s picture (why they would be interested in that) and his sudden realization seems absurd. They was no need for that as it was apparent by the end of the ‘Main Kya Hoon’ song.

Saif Ali Khan acts well in some parts and overacts in others. He is very good in some scenes where his expression changes from happy and carefree to sad and gloomy in a matter of seconds. He is ok as Veer Singh but he has done the carefree cool yuppie so many times (Dil Chahta Hai, Salaam Namaste, Hum Tum) that it has lost its charm. He looks aged and bad when he is trying to be super cool. Deepika acts well except for the first 20 minutes or so in London. She is pretty good in the emotional scenes and shows that she can cry well too. The new girl (who ever she is) looks very cute with her coy glances and acts well though she just has a couple of lines. Rishi Kapoor is decent and Rahul Khanna is ok.

Dialogues range from excellent to amateurish. The cinematography is very good and the music by Pritam is in keeping with the movie. The ‘Yeh Dooriya’ song seems out of place and should have been set during the final scenes instead. The song ‘Main Kya Hoon’ is brilliantly picturized with the same scenes showing Saif’s happiness gradually turning to gloominess. Choreography in ‘Chor Bazari’ is very good and Deepika is excellent in the song. The ‘Aahun Aahun’ track has moves from the ‘Samne Yeh Kaun Aaya’ remix song that came out a few years back and one wonders if its the same choreographer.

Imtiaz Ali whose previous two films Socha Na Tha and Jab We Met were totally set in India takes the NRI route this time. It is apparent that he is not comfortable with the NRI portions. The best part of the movie is from the point they break up till Meera’s marriage and the movie again takes a turn for the worse becoming a Kabhi Alvida Naa Kehna. Now why Imtiaz had to copy Karan with what happens after the marriage is an enigma. The movie could have been much better had Deepika just got engaged rather than getting married. It does not bode well that marriage is treated as something so casual and makes Meera’s character look immature rather than a smart career oriented women. The first and last 20 minutes mar the whole movie watching experience and you end up with an average movie instead of a good movie that it could have been.