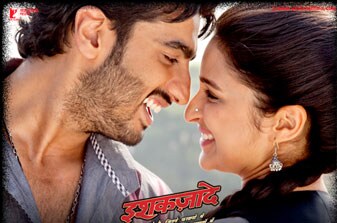 I wonder if the Indian film ritual of intermission also functions as a creative road-block. Because so many fine films derail exactly there; I call it the curse of the second half. Ishaqzaade is one of these.

The film starts on a high note. Two children ferociously swear at each other. They grow up to be Parma (Arjun Kapoor) and Zoya (Parineeti Chopra), two firebrands in small town UP who belong to rival political families and rival religions — he is Hindu, she is Muslim — and make the horrific mistake of falling in love.

Their courtship is conducted in unused train compartments and there’s much affection for guns: At one point, he teaches her to shoot. He can’t say Zoya. Instead he calls her Joya. She, and we, are delighted.

So far, so good. Then, quite inexplicably, this love story that we are fully immersed and invested in shifts tracks. I don’t want to reveal the plot, but there are some decidedly odd developments, which lead them to part ways and get together. The pleasure peters out and the film becomes a long chase sequence with goons, guns and families that turn against each other and their children. Parma and Zoya start out as the most interesting couple in an ordinary town but halfway through, writer-director Habib Faisal decides to mythify them. It feels false and tonally inconsistent.

Faisal sets up the story with great precision. Kapoor and Chopra are terrific as the explosive twosome. The music, composed by Amit Trivedi, works well. The casting is bang-on: Parma’s swaggering grandfather and his long-suffering but strong mother are nicely etched characters as is the local dancing girl, played by Gauhar Khan. Which is why it’s so disappointing to see it unravel. Still, Ishaqzaade does provide half a good time. How many films can you say that for?