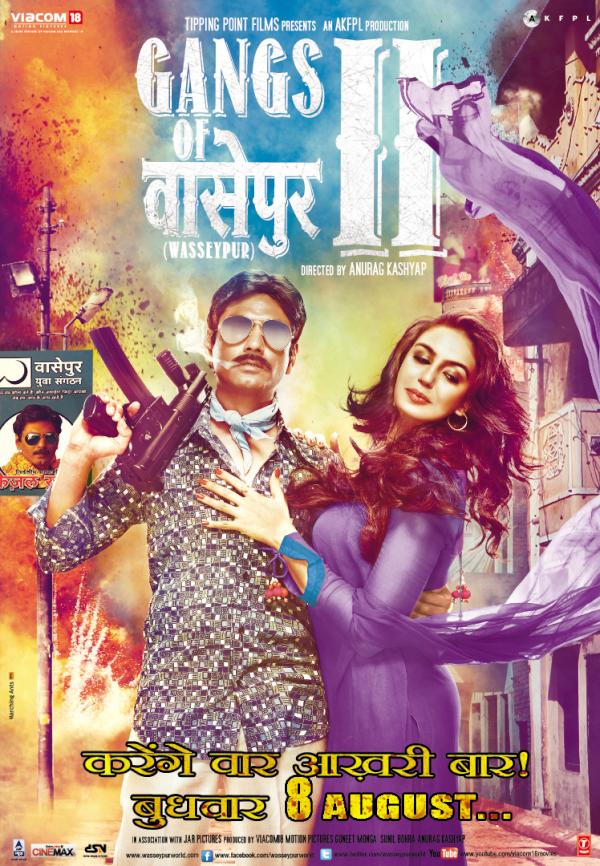 Barring the long runtime, one isn’t quite certain whether Anurag Kashyup’s idea of releasing the Wasseypur chronicle in two different parts is a good idea or bad. Bad because drawing parallels with the prequel is inevitable and in that context the sequel pales in comparison. And good idea because it makes the prequel look as a standalone superlative saga! Had the two been clubbed together, the limitations of the second would have diluted the overall impact.

Having said that it’s important to clarify that Gangs of Wasseypur Part 2 is not substandard cinema by any means. With the two episodes being conceived and filmed simultaneously, the sequel carries forward the same grit, grammar, vigour and vengeance of its predecessor. However beyond a point it falls slack on story, after which it stretches the yarn, turning repetitive and foreseeable.

The sequel starts exactly from where the forerunner ended. Post the death of his father Sardar Khan, followed with his brother’s murder, Faizal (Nawazuddin Siddiqui) takes over as the dreaded gang-lord of the crime syndicate in Wasseypur. However with every other local aspiring to be a Sultaan or a Sardar, the city and its crime scene aren’t as it used to be. Ramadheer Singh (Tigmanshu Dhulia) continues to be the antagonist who, this time, attempts to instigate Definite (Zeishan Quadri), Faizal’s stepbrother, against him. However all is not what it seems with a lot of double-cross and triple-cross in store.

The narrative continues to be as random and racy with the revenge drama claiming more lives rampantly. New characters in the form of Perpendicular, Tangent, Definite, et al are introduced and their juvenile criminal activities and swiveling storytelling structure evidently remind of the Brazilian Masterpiece City of God, a regular reference point for this genre.

It’s indulgence, rather over-indulgence, that sabotages the sequel to an extent. Onscreen Faizal indulges in substance abuse while off-screen director Anurag Kashyup gets indulgent with the characters and the chronicle. Peripheral characters (who were central to the story in the prequel) are eliminated. With stray bullets killing mortals erratically, death becomes so commonplace that it no more leaves an impact. The tone of the film changes in every alternate, and though it’s intentional, you stop feeling for the characters in the fluctuation. Thereafter the film keeps extending endlessly turning out to be an ordinary gang-war account.

Though Nawazuddin Siddiqui has immense screen-presence despite his straight-faced demeanour, his one-dimensional characterization is an intermittent letdown. As a perpetually-doped don who lacks business sense and is vulnerable to materialism, he is quite the opposite of his father Sardar Khan, the protagonist of the prequel. And with this divergence in the characterization, you don’t root as strongly for Faizal as you did for Sardar Khan, though both are equally immoral, vicious and well-enacted characters. Kashyup often camouflages the shallowness of Faizal with glamourized shots of drugs and violence.

Nevertheless, despite the sequel being in standard zone, it is often absorbing. The gradual progression over eras is subtly and smartly punctuated with strategically placed elements, distinctive of the decade. With guns and gadgets coming into picture, the revenge drama is regular yet relatable. A chase sequence amidst the bustling city is as real as it gets. Also the narrative comes full circle returning to the opening mob-attack sequence with which the first part initiated. Only this time you get to see it from the internal side, learning what Faizal and family went through. The epilogue, though predictable, is poignant.