Movie stars, like any brand, have a particular identity that is fostered and sold to the audience as what makes them distinct and somehow ‘better’ than all competing brands. In the case of action stars their brands are built to a VERY large degree on the base of “We really do this stuff”. If you see it on screen, it’s because someone really did it.” That’s what adds that extra bit of thrill to their work, because they are really laying their bodies on the line.

But since the inception of VFX into films and action in particular, quite a few wannabes take themselves too seriously as “action heroes” just to get that USP which was attached historically to the legendary martial artist actors. The first film which probably did this was The Matrix in 1999 and since then it has been done to death in just about every small and big ticket film in the West and East. The technology has been milked for all its worth so much as so that it has barely any novelty or wow factor left. Worse, it had made the actors delusional and lazy. For an action enthusiast it can be very insulting to see a wannabe action star pretending to be macho and cool while his body language is laughably bad. Most of these actors are not even aware of basic aerial techniques or even human motion physics, forget about actually doing them properly.

Experts/ppl with martial arts background can of course analyze and detect such fake action in detail but even a discerning viewer with his common sense and basic human physics can make out the shoddiness when VFX is used in both Hollywood and Bollywood films.

1) One of the most common sequence is when the hero makes a front leap to attack. You can tell everything about the move from the actors body language. Practically when a traceur makes front leap, the body is always hunched with the knees slightly bent and the legs will ALWAYS point forwards. This kind of position brings his entire body weight near his centre of mass and therefore the person can cover a really long distance. Also the legs point forward in the direction of the momentum of the body which enhances the speed of the leap.

Here is a scene from a typical South Indian actioner Singham where he is attempting a similar leap by using wires. The body is stiff and straight as its held by cables and the legs are in the exact opposite direction because he and his choreographer are simply ignorant or lazy to even care about how its done in real life. 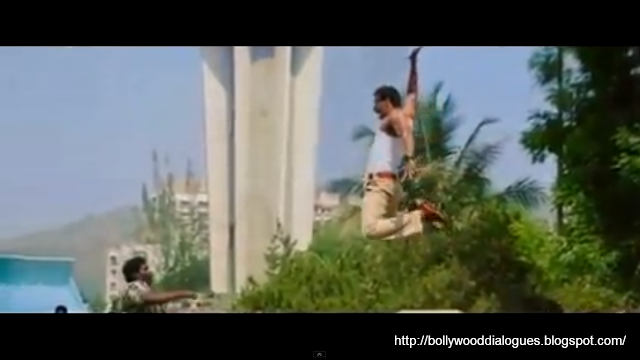 Here is a similar leap by by Akshay in KKK, Vidyut in commando and by Tony Jaa in Ong bak. Check the body dynamics and the positioning of the legs.

2) Another common sequence is the roof run.It looks very thrilling and visually appealing when a traceur does it. Mostly used in chase scenes.
I remember one such chase sequence in Dabangg. Salman’s body language here is like those kids in shopping mall compounds attempting bungee trampolines. The scene on the right is from District 13 showing how the position should be while doing a roof run. It is similar to the forward leap just that the body will be more hunched towards the center so that when you reach the ground, the point of contact of the surface area of the body with the ground is minimal and thus the shock of falling can be resisted without any breakage of bones.

3) Almost all the aerial moves must finish with a roll over with the exception of butterfly kick and corkscrew. Now whether you do any kind of vault or leap there is no way you can stop the body movement without the roll over.

This always reminds me of the Krrish/Dhoom stunts by Hrithik. When he is done jumping like super mario on the buildings, he lands like Tommy Vercetti of GTA vice city. A human body can never stop without a proper roll over after a massive aerial move. Mostly the roll is over the head or shoulders. This is the safest and probably the only realistic way to finish a grand aerial move.

4) The wall flip is spectacular to look at if done neatly. But equally cringe worthy when done by a wannabe using cables. Here is the still from Dhoom 3 where Kat is attempting a wall flip but look at her legs. She has compacted her whole body and the only reason why she remains suspended in the air in this ridiculous position is because she is held by wires. The other still is a similar wall flip done by Vidyut in commando where the legs are apart and closer to the wall while the upper and lower half of his body take the shape of the letter “U”. This results in safe landing because wall flip is basically a no-hand cartwheel done on the wall instead of the ground.

In case of the non-aerial action scenes, a very simple give way of wire work is when either the fight is fast forwarded or done in ultra slo-mo. Both look ridiculously bad and are shot that way to hide the inabilities of the actor but the audience is intelligent enough to notice it. Those who can carry it off without wires will never go for these tricks. They will go for the real time motion.

Hunting the stunt double is also pretty easy. There will be lots of back shots or “hurried” camera movements. There will always be a minor difference in the physique and height. Another way is to chek if the actor himself is Photoshopped during such scenes. In ETT Salman’s face was superimposed on a stunt double. Same with Rajini in robot.

Thankfully the trend of such OTT fake action is on decline. People are bored of feeling like jackasses watching such nonsense in theater after paying 200-300 rupees. It is about time the filmmakers realized it.