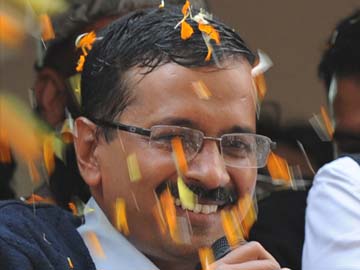 New Delhi: In a mega political bender, rookie politician Arvind Kejriwal has defeated three-time chief minister Sheila Dikshit in her constituency of New Delhi by some 22,000 votes. His one-year-old Aam Aadmi Party made a spectacular electoral debut winning 27 of Delhi’s 70 seats, just six behind the BJP, which is on top.

“Who has won this election? It is the common man…the aam aadmi,” Mr Kejriwal said this evening to  a crowd of jubilant supporters, who logged many hours waving the party symbol, the broom. “We have shown politics will not be held hostage anymore to either corruption or communalism. If the old parties don’t recognize this, the public has shown it can make them redundant,” the former tax inspector said.

Voters mercilessly spurned Ms Dikshit and her party, permitting the incumbent Congress less than 10 seats. The BJP with 33 seats needs three more to form the government. Mr Kejriwal is emphatic that he will not align with either the Congress or the BJP.

Through their campaign in Delhi, the Congress and the BJP made the gross tactical error of underestimating Mr Kejriwal’s ability to mobilize public support.

An army of meticulously-organized volunteers spread through the city, promising that the  Aam Aadmi Party (AAP) would shake up and cleanse a system manipulated by power brokers. They raised  20 crores through small donations – with supporters listed on the party website.

“We did not expect a newcomer with no clear agenda to have this sort of impact,” admitted the BJP’s Chandan Mitra.

Critics of Mr Kejriwal say the AAP’s economic policies are unsound and that its kinetic energy will not sustain till the national election, due by May.

Mr Kejriwal formed the AAP after  he split with his one-time partner Anna Hazare. In 2011, they invigorated middle class India with a movement demanding the introduction of the new anti-graft Lokpal Bill.

After a strong launch, the campaign dissipated; Mr Kejriwal said he had no choice but to enter politics, a move Anna refused to support.